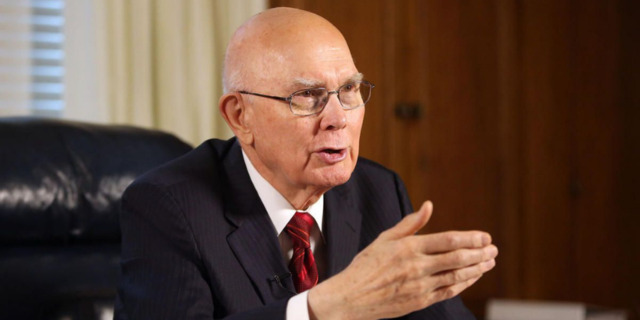 Nearly 37 years ago, President Oaks was called as an Apostle. Here's the behind-the-scenes story of that life-changing moment

On Friday evening, April 6, 1984, Dallin H. Oaks was in Tucson, Arizona, where he and two others sat as moot court judges at the University of Arizona Law School. When the competition ended, the three judges went to a Mexican restaurant for dinner and an awards presentation. During festivities before dinner—“cocktails for others; nachos for me,” Dallin wrote—he was called to the phone near the restaurant’s cash register. “I went to the cash register,” Dallin recalled, “and a mariachi band was whanging away in the background. It was a chaotic scene.”

The caller turned out to be President Gordon B. Hinckley of the First Presidency. “I cannot imagine how he found me there,” Dallin wondered in his journal, especially since (as he learned from the law school’s dean) the school’s switchboard was closed. In any case, President Hinckley asked Dallin to call him when he got back to his hotel. Dallin was accustomed to contact with senior Church leaders and “went on to dinner, without concern, though curious about what could be so serious that he would phone me at this busy time.”

After the dinner, as Dallin was being driven back to his hotel, he finally had time to focus on what President Hinckley might want and “wondered if this could be a calling.” Though that was possible, he thought, it “was not likely since I had received no inklings or premonitions” of such a thing recently. He knew it was general conference weekend, but—as he wrote two days later—“I was blissfully unaware that this had any significance for my future.”

When Dallin got to the hotel, he phoned President Hinckley as requested. After a quick inquiry about worthiness, President Hinckley—in the direct manner for which he was well-known—told Dallin he “was called to be a member of the Council of the Twelve.”

“I gasped, ‘Oh,’” Dallin recorded in his journal. “It seemed unreal. I heard him say how this would change my life.

“Forty-eight hours ago,” Dallin Oaks wrote at 10:00 p.m. on Sunday, April 8, 1984, “my world was turned upside down. It will never be the same again.” He had prayed long and hard to know what his final occupation in life would be, and now he had his answer. But he had not expected what came. In other major changes in life, he had often had a premonition of what would happen to him. Not this time.

On Friday evening, after President Gordon B. Hinckley called him to be an Apostle of the Lord, Dallin had a hard time sleeping. “I prayed,” he wrote. “I tossed and turned. I had chills, especially my feet, which I couldn’t get warm. I got up twice and made notes, things to do. I prayed again. And again. I asked how or why I was so unprepared and unwarned for this calling. I found myself wondering if I was hallucinating, if this was really happening.”

Why was he away from home at general conference time? “I condemned myself for being in Arizona” on judicial business, he chided, “when I should have known I was to be called. Only on that subject did I receive a comforting feeling. I felt assurance that my being in Arizona was where I should be—that it was not displeasing to the Lord.”

Dallin contemplated the thought and soon understood it. “As I pondered that impression,” he wrote, “it occurred to me that my being out of state permitted President Hinckley to give a convenient and proper explanation of my absence, and that my absence would facilitate my transition from state to Church. If I were present and speaking, I would be seen as a General Authority, and might not be able to complete my work as a judge.”

► You may also like: Richard E. Turley Jr.: How I came to write ‘In the Hands of the Lord: The Life of Dallin H. Oaks’

When President Hinckley first extended the call by phone, he asked Dallin if he could return to Salt Lake City the next morning to attend the Saturday sessions of general conference. Dallin explained he had to preside over a vital PBS board meeting on Saturday in Chicago. “He said I should go,” Dallin recorded, “and complete that assignment. They would present my name and explain that I was out of the state on a prior assignment.

“I then explained a ‘problem’ with pending [court] cases,” Dallin noted, “pointing out that if I began my service immediately, it would cast a shadow over about a hundred pending cases, plus prevent me from completing [my] opinions in about a dozen.” It might also cause problems in his PBS work.

“President Hinckley immediately said he saw the problem and thought we should delay my ordaining and commencing service until I had a suitable time to wrap up my judicial work,” Dallin wrote. “He asked me to think further on the implications of the announcement and sustaining now with my service to commence several weeks later, and to phone him in the morning at 6:15.” Dallin agreed to do so.

President Hinckley said Dallin could tell June about his call, clarifying that “no one else should know.” Dallin phoned her, and they spent forty-five minutes, he summarized, “sharing our ignorance, our apprehensions, our wonderment, and our love and determination to serve wholeheartedly and effectively.”

During the troubled night that followed, Dallin turned the matter over and over again in his mind, along with other questions that pressed on him. “I got 2½ hours sleep,” he wrote.

Though Friday night seemed interminably long, 6:15 a.m. Saturday finally arrived, and as promised, Dallin phoned President Hinckley with his thoughts. Even though Dallin would be returning to Salt Lake Saturday night after his PBS meeting, they agreed he should not show up at conference on Sunday. Better to wait until he could clear the decks of any potential conflicts. “I pledged my wholehearted efforts to clear every obstacle and begin my service as soon as possible,” Dallin wrote.

Later that Saturday morning when it came time to sustain Church leaders in general conference, President Hinckley noted the two vacancies in the Twelve occasioned by the deaths of Elders LeGrand Richards and Mark E. Petersen. When he read the names of the two new Apostles—Russell M. Nelson and Dallin H. Oaks—he offered an explanation.

“With reference to Dallin Oaks,” he said, “I should like to say that while we nominate and sustain him today, he will not be ordained to the apostleship, nor will he be set apart as a member of the Council of the Twelve, nor will he begin his apostolic service, until after he completes his present judicial commitments, which may require several weeks. He is absent from the city, and necessarily absent from the conference. We excuse him.”1

The sustaining of Russell M. Nelson as an Apostle that same day pleased Dallin because he knew the famous heart surgeon who would thereafter sit beside him in the Quorum of the Twelve. Eighteen years before their simultaneous calls to the Twelve, then-Professor Oaks had participated in efforts to recruit Dr. Nelson for a position at the University of Chicago medical school. The doctor had decided not to accept the offer, but the interaction allowed the two to get to know each other.2

Five years later, in 1971, Dallin became president of BYU, and Russell was called as General President of the Sunday School. They both excelled in their professions and served in stake presidencies and as regional representatives of the Twelve, and they became close friends. “To June and Dallin,” Russell wrote in a copy of his autobiography that he gave them in December 1989, “With deepest admiration and gratitude. You are truly special to me. Love, Dantzel and Russell.”

► You may also like: The story behind President and Sister Oaks’s first date

Even after taking two days to contemplate his new responsibilities in the Twelve, Dallin struggled to portray the maelstrom of feelings that enveloped him in the hours after his call. “This account does not begin to cover the emotions of that 24-hour period, ending Saturday evening,” he explained in his journal. Sunday too, he wrote, “has been like living a dream.”

In the Sunday conference session, President Hinckley said of the two new Apostles, “I want to give you my testimony that they were chosen and called by the spirit of prophecy and revelation. There was much of prayer concerning this matter. There was discussion with President Kimball, the prophet of the Lord in our day, and a clear statement from him, for his is the prerogative in these matters. There was a clear and distinct impression, what I choose to call the whisperings of the Holy Spirit, concerning those who should be selected to assume this most important and sacred responsibility.”

President Hinckley acknowledged that both were “men of learning and achievement in their respective professions” who had been honored by their peers. “But this is not why they were chosen,” he emphasized. “Their service in the Church has been noteworthy,” he added, giving examples of that service. “But this is not why they were called,” he said again. “They were called,” he stressed, “because the Lord wanted them in this office as men who have a witness of his divinity, and whose voices have been and will be raised in testimony of his reality.”3

Even after this assurance, Dallin remained overwhelmed, numb, as though in shock. “I still feel beside myself,” he wrote that evening, “as if I were a player in some drama. The emotional-spiritual impact has not registered.” Before bed that night, Dallin penned a prayer in his journal: “May our Heavenly Father bless me to magnify a calling so sacred I can only begin to understand its significance!”

This engaging biography by noted historian Richard E. Turley, Jr. takes the reader on a fascinating journey through the life of an extraordinary leader. It is filled with stories and photographs detailing his boyhood, his family life, his education and military experiences, and his distinguished academic and law career. In the Hands of the Lord is now available in Deseret Book stores and at DeseretBook.com.