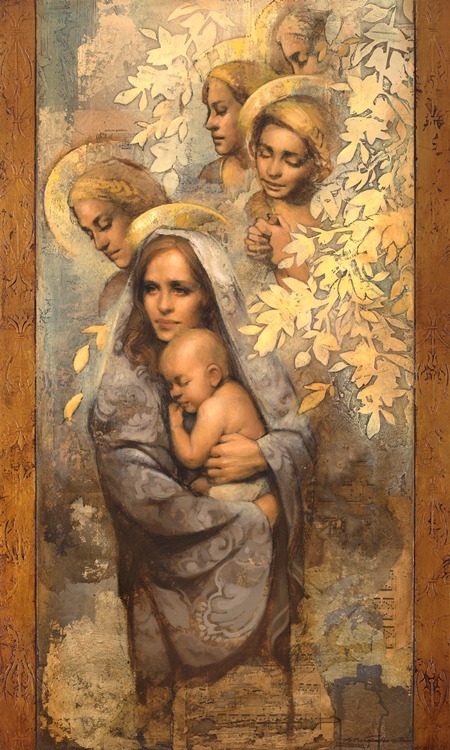 Henrie says angels like these are representations of love. They remind her of the people in her own life—her mother, friends, and family—who have been angels to her.

However, angels aren’t the only symbolism found in this beautiful painting. An observer might notice some slim yellow halos around the heads of the angels, influenced by Renaissance art. Henrie explains that the halos were a way of setting a painting apart as holy and the people with halos as holy people. But Henrie goes on, “They’re kind of incomplete, especially with the mom. Her halo isn’t really complete, but it’s there. She’s not perfect yet, but she’s still a divine person. She’s getting there.”

The title, Mother’s Lullaby, brings the entire piece together with a special corresponding motif within the painting: “If you look at it closely, it has sheets of music woven throughout the painting. I think a mom singing a lullaby is the perfect moment of feeling watched over. Feeling the closeness and tenderness and love, I feel like the word lullaby invokes all of those.

Purchase Mother's Lullaby for your home at Deseret Book stores and deseretbook.com.