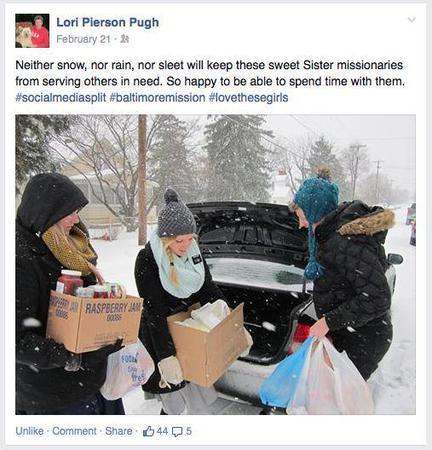 Last fall, the Maryland Baltimore Mission of The Church of Jesus Christ of Latter-day Saints launched a social media initiative to better demonstrate who and what the church’s full-time missionaries are all about.

The idea, coined #SocialMediaSplit, was born in the Ohio Cincinnati Mission by church members and public affairs gurus Geoff Thatcher and Paul Beck, as a friendly response to the touring production of "The Book of Mormon" musical. It was later adopted and significantly adapted by President Mark L. Richards of the Maryland Baltimore Mission.

In recent months, the idea has spread from Baltimore to Oklahoma City and Montreal to Chesapeake, Virginia.

In Maryland, President Richards has invited leaders, members and missionaries across the six stakes in the mission boundaries to call the third Saturday of the month “#SocialMediaSplit Saturday.” All day long, members either split or team up with missionaries for activities like teaching, giving church tours or performing service.