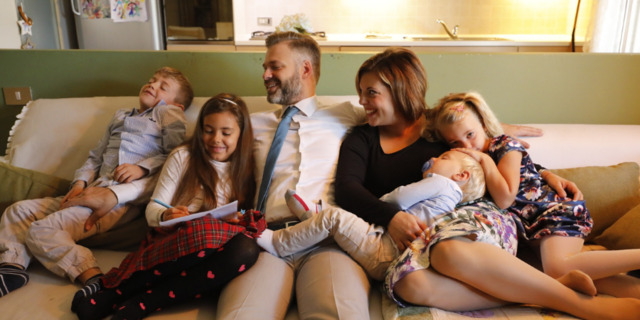 Those who pray and study scriptures at home report higher levels of happiness, meaning, and feelings of God’s love in their life, according to a new study from the Wheatley Institution. Highly religious couples—those who attend church and worship regularly at home—also report greater relationship satisfaction, sexual satisfaction, and a sense of spousal commitment, kindness, forgiveness, and joint decision-making.

This prophetic direction came just over a year before the worldwide pandemic forced churches to close their doors around the globe. Thankfully, millions of individuals and families were able to access these home-worshipping resources during this period of time away from regular church service.

► You may also like: 19 ways the Church is prepared for the COVID-19 pandemic

And now there’s research that underscores the spiritual and relationship benefits that can come when engaging in these kinds of home-centered worship patterns.

The report released this week looked at data from more than 16,000 survey respondents in 11 countries, including the United States. They found that “home-worshippers”—couples who regularly attend church and also regularly participate in prayer, scripture study, and conversations about their faith at home—report a number of benefits not experienced by their peers.

Many of the benefits that we might expect to go along with religious observance—such as finding meaning in life, having greater happiness, and feeling God’s love—were seen in both home-worshipping couples and couples who simply attend church but don’t engage in regular patterns of worship at home.

The fascinating point in this study was that the home-worshippers were significantly more likely to find greater meaning, happiness, and feelings of God’s love in their life.

The study’s authors remark: “While these two groups are overtly similar in their regular weekly church attendance, there appears to be something particularly influential in the practice of home worship that taps faith’s potential to endow life with an enduring sense of meaning.”

Despite what New York Times writer Clay Routledge has called today’s “crisis of meaninglessness,” the findings suggest that religious devotion imbues life with meaning and purpose. To put it another way, with the frequent practice of prayer and study, and with a desire to commune with and learn from God, home-worshippers report a 90–95% chance of feeling God’s love daily, whereas those who go to church sometimes or regularly but do not engage in home worship report experiencing a 50–75% chance of feelings God’s love each day.

► You may also like: When it comes to family scripture study, done is better than perfect

In the recent conference, we heard Apostles describing the decline of religious practices. For example, Elder Neil L. Andersen cited Pew Research data showing worrisome trends such as many stepping aside from religious beliefs and societies becoming more secular. And, in his opening remarks, President Nelson lauded the fact that “increased gospel study in many homes is resulting in stronger testimonies and family relationships.” The spiritual gifts of home-worshipping are clear, and this new research reminds us in a beautiful way that religious devotion at home also has benefits for our happiness and relationships. By following the inspired direction of a prophet to be actively involved in home worship, we find his counsel has the potential to continue to strengthen us as families and individuals worldwide as we move forward in a time of uncertainty.

Julie H. Haupt is an associate professor in Brigham Young University’s School of Family Life where she directs the school’s writing program. Kaylin Cash is a member of the BYU Student Editorial Board.