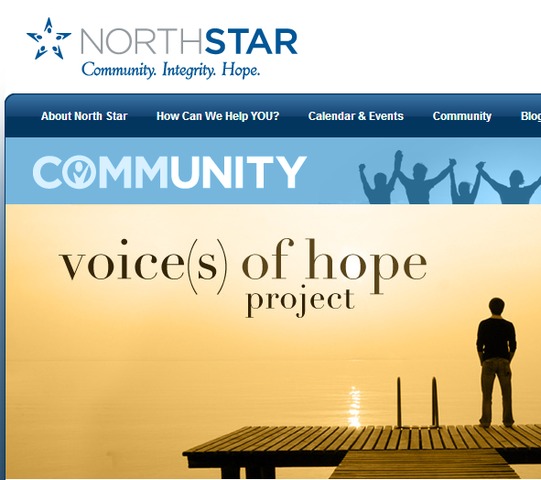 “Live how you want.” “You’re free to choose your own lifestyle.” “God supports you no matter what you choose.”

These are the messages purported by most online resources for those dealing with same-sex attraction.

The idea for Voices of Hope was born when Kerry Harding, who had struggled as an ecclesiastical leader in the Church on how to help those dealing with same-sex attraction (SSA), noticed that rarely were online resources about SSA faith-promoting or commandment-encouraging. He sought to create a voice for those experiencing SSA that would encourage them to live the gospel.

Harding contacted Ty Mansfield, the co-founder of North Star (an organization for Latter-day Saints experiencing SSA) who had previously shared his own personal journey of living with same-sex attraction in the gospel on LDS Living. Mansfield was on board with Harding’s idea.

Together, under the umbrella of North Star, Mansfield and Harding aim to create a website continuation of Mansfield’s book, Voices of Hope, which will include 1000 voices through video and essay of real people sharing how they’ve found peace and resolution in living the commandments despite feelings of SSA.

“There are a lot of cultural messages that are contrary to the gospel,” said Mansfield, “and those are the loudest voices, so for most people who are coming to terms with [SSA], those are the voices they’re hearing first. There just aren’t enough people who are faithful, who have chosen the gospel and who find peace in it, who have had a meaningful forum to share their stories.”

Lofty may be an understatement to describe the project—after all, Mansfield and Harding not only aim to find 1,000 people willing to share their stories but also hope to raise as much as one million dollars to cover the financial cost. But Mansfield and Harding believe they can reach their goal.

Luckily, the project has an experienced videographer on board—Mansfield’s brother-in-law, Adam Sanders—as well as many volunteers. They originally aimed to share the 1,000 voices in the combination of video and essay. After filming the first shoot, however, they felt that the videos were so powerful that they are now hoping to film 1,000 videos of those affected by SSA who are “committed to the Church and willing to speak up and share.”

Shorter versions of the videos will be shared online, as well as the full version (45 minutes to an hour) of each interview. With all of this video content, Mansfield and Harding hope to create resources for those who are struggling to help them see that they’re not alone. “There’s only so far you can go in feeling like there are others out there who get you, if you’ve never met them in person,” said Mansfield.

Voices of Hope wants to give people light, hope—and the encouragement to live the gospel.

“The goal and the hope is to help change the cultural conversation so people know there are options and it’s possible to be happy and faithful in the gospel,” said Mansfield, “and that we can actually put faces with that choice.”

Those interested in supporting the project can become a voice by agreeing to be filmed or can sponsor a voice by donating to the project. More information can be found at the North Star website: http://northstarlds.org/community/voicesofhope/.