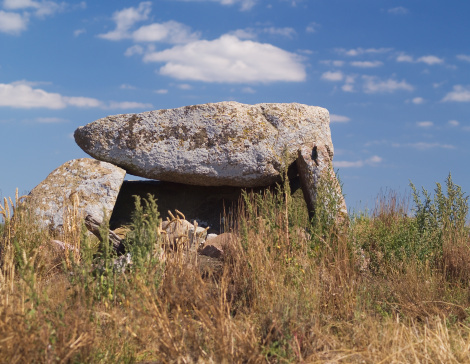 INTRODUCTION: I have been interested in a statement made about Abraham by Moses in Genesis 24:

And Abraham was old, and well stricken in age: and the LORD had blessed Abraham in all things (Gen. 24:1).

Well, of course the Lord had blessed him in all things.  He had passed every test, including the test at Mount Moriah when he placed Isaac on the altar.  The Lord must have known that Abraham would serve him at any hazard and any cost.  Therefore he blessed this faithful son.

As we review the life of the father of the covenant in the next three lessons, let his obedience teach you and let his love of God inspire you.  He is your ancestor and many of the blessings that come to you in the gospel come because you are of the faithful seed of Abraham.

Abraham grew up in an apostate household and a home that was not just broken but shattered.  The very first thing he tells us about himself in the book of Abraham is that he has figured out that he needs to find a new residence (see Abraham 1:1).

Sometime in the early years of his life he seems to have learned that there were opportunities for “greater happiness and peace and rest” than he was currently experiencing, and he began to seek those blessings:

And, finding there was greater happiness and peace and rest for me, I sought for the blessings of the fathers, and the right whereunto I should be ordained to administer the same; having been myself a follower of righteousness, desiring also to be one who possessed great knowledge, and to be a greater follower of righteousness, and to possess a greater knowledge, and to be a father of many nations, a prince of peace, and desiring to receive instructions, and to keep the commandments of God, I became a rightful heir, a High Priest, holding the right belonging to the fathers. It was conferred upon me from the fathers; it came down from the fathers, from the beginning of time, yea, even from the beginning, or before the foundation of the earth, down to the present time, even the right of the firstborn, or the first man, who is Adam, or first father, through the fathers unto me. I sought for mine appointment unto the Priesthood according to the appointment of God unto the fathers concerning the seed (Ab. 1:2-4).

Abraham knew that as a follower of righteousness he had a right to an appointment to the priesthood and he sought for and received that appointment and became a High Priest.  You all know men who bear this same office in the priesthood.  How have they prepared themselves to become “rightful heirs”?  What lessons can Abraham teach about being anxious and worthy to possess and use the priesthood?

The Lord directed Abraham to seek a new home in a land he called Haran.  While he lived there the Lord made mortal and eternal promises to Abraham.  These promises constitute the Abrahamic Covenant.  That covenant is described by Bruce R. McConkie as follows:

Abraham first received the gospel by baptism (which is the covenant of salvation); then he had conferred upon him the higher priesthood, and he entered into celestial marriage (which is the covenant of exaltation), gaining assurance thereby that he would have eternal increase; finally he received a promise that all of these blessings would be offered to all of his mortal posterity. (Abr. 2:6-11; D. & C. 132:29-50.) Included in the divine promises to Abraham was the assurance that Christ would come through his lineage, and the assurance that Abraham's posterity would receive certain choice, promised lands as an eternal inheritance. (Abr. 2; Gen. 17; 22:15-18; Gal. 3.)

All of these promises lumped together are called the Abrahamic covenant. This covenant was renewed with Isaac (Gen. 24:60; 26:1-4, 24) and again with Jacob. (Gen. 28; 35:9-13; 48:3-4.) Those portions of it which pertain to personal exaltation and eternal increase are renewed with each member of the house of Israel who enters the order of celestial marriage; through that order the participating parties become inheritors of all the blessings of Abraham, Isaac, and Jacob. (D. & C. 132; Rom. 9:4; Gal. 3;  4.)

2. WE ARE HEIRS TO THE BLESSINGS AND RESPONSIBILITIES OF THE ABRAHAMIC COVENANT.

Members of the Church are the seed of Abraham.  President Kimball said:

Many times I have tried in my mind to span the long centuries that link us to our common fathers, this Lamanite brother and I, and my soul is stirred when I remember that in our veins flows the blood of the Lord's elect—the great patriarchs of the Old Testament, such as Adam, and Enoch, and Noah. I am humbled to know that our common father was Abraham, of whom it is said there were no greater ones and through whose seed the Lord has chosen to carry out his holy purposes on the earth. Isaac, one of the great prophets of all time, and Jacob, the father of all the house of Israel, are our ancestors. Joseph who was sold into Egypt, a man of constant virtue who was in his day a savior to his father's house, is also the father of most members of the Church today, including the descendants of Lehi, Ishmael, and Zoram. (The Teachings of Spencer W. Kimball, p.594)

Joseph was the birthright son.  Reuben, the firstborn son of the first wife, forfeited his claim on these blessings by his immorality (see Genesis 35:22; 49:3,4). Therefore the blessing was given to the first son of the second wife.

It became Joseph’s opportunity to receive a double portion of his father’s goods (thus both Ephraim and Manasseh received land inheritances in Israel), and it became his duty to care for the family of his father.  Moses blessed the tribes of Israel before they entered the promised land, and he said to Joseph’s seed:

It is Joseph’s duty to gather the family together again in the last days.  How interesting it is that so many of the converts of the church in these decades since the restoration have come from Ephraim and Manasseh.

Abraham gives a clear presentation of the duty associated with the covenant of Abraham, and the ministry that becomes the responsibility of those who seek blessings therefrom.    Read these four passages and then I will summarize their message for each of us. I will italicize key phrases in each verse.

1. As it was with Noah so shall it be with thee; but through thy ministry my name shall be known in the earth forever, for I am thy God. (Abr. 1:19)

One of the duties given Abraham was to insure that the name of Christ was never forgotten in this world created and redeemed by him.  On a personal level, his descendants must insure that individuals living in the world hear the name and know of its meaning.  “Wherefore, how great the importance to make these things known unto the inhabitants of the earth, that they may know that there is no flesh that can dwell in the presence of God, save it be through the merits, and mercy, and grace of the Holy Messiah . . .” (2N2:8).

2. I have purposed to take thee away out of Haran, and to make of thee a minister to bear my name in a strange land which I will give unto thy seed after thee for an everlasting possession, when they hearken to my voice (Abr. 2:6).

I have sent missionaries (sons and daughters to such places as the Canary Islands, Chile, El Salvador, Brazil, New York, California, Puerto Rico, and Indiana.  Talk about strange lands!  Part of the ministry of the seed of Abraham will always be to take the message to any land where it can be delivered.

3. And I will make of thee a great nation, and I will bless thee above measure, and make thy name great among all nations, and thou shalt be a blessing unto thy seed after thee, that in their hands they shall bear this ministry and Priesthood unto all nations; (Abr. 2:9)

In addition to the sweetness of the gospel message, we also go armed with the Priesthood of God, prepared to officiate in the ordinances of salvation in all nations.

4. And I will bless them that bless thee, and curse them that curse thee; and in thee (that is, in thy Priesthood) and in thy seed (that is, thy Priesthood), for I give unto thee a promise that this right shall continue in thee, and in thy seed after thee (that is to say, the literal seed, or the seed of the body) shall all the families of the earth be blessed, even with the blessings of the Gospel, which are the blessings of salvation, even of life eternal. (Abr. 2:11)

This ministry will bless all the families of the earth—living and dead, near and far. It pleases me that the noun used here is families rather than individuals or peoples.  This ministry is primarily a ministry directed at families.  Since the Abrahamic Covenant includes the ordinance of eternal marriage, nothing could be more logical.

CONCLUSION: It is hard to imagine a greater honor than that of being the seed of Abraham, and yet that singular distinction, by itself, has no merit at all. To the Jews who believed that their genealogy made them special in the sight of God, John said,

And think not to say within yourselves, We have Abraham to our father: for I say unto you, that God is able of these stones to raise up children unto Abraham. (Matthew 3:9)

As his heirs, we are offered the blessings of his covenant, but we cannot long enjoy them unless we are willing to share them, both by precept and by example.

Just as Israel was placed in the middle of the highway of nations at the edge of the great sea, so modern Israel was place at the “crossroads of the west.”  Part of the intent in both cases must have been to increase the exposure of righteous Israelites to the nations of the world. This exposure has taken place now on an unprecedented scale as recent political events have turned world attention to the Mormons.  In a wonderful and unexpected way, the attention of all nations has turned toward the mountain of the Lord’s house in the tops of the mountains.