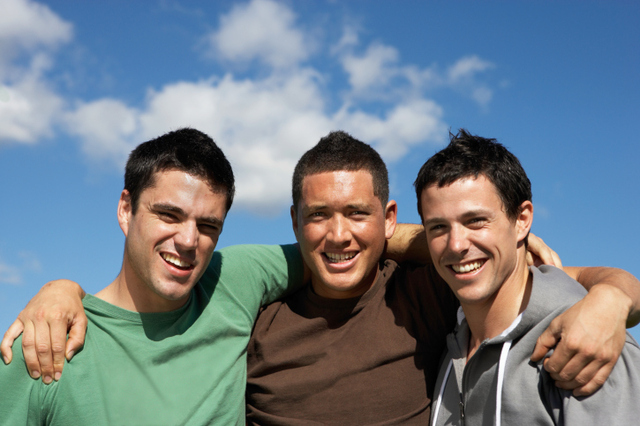 Although our memory of it is withheld, before we came to this earth we lived in the presence of God, our Eternal Father, and His Son, Jesus Christ. We shouted for joy when given the privilege of coming to this earth to receive a body and to move forward in God’s plan for our happiness. We knew that we would be tested here. Our determination was to live obediently to be able to return to be with our Father forever (“Jesus Christ, Our Redeemer,” Ensign, May 1997, 53–54, emphasis added).

Not only can we say with perfect assurance that this life is a test. We can also identify the kind of test it is. We are taking a multiple choice test. Based on the principle of agency, we must choose from all the opportunities available to us, those that will best assist us in preparing to be with and to be like our Father in Heaven.

Abraham lived in a world rampant with iniquity. People had degenerated to the point that parents were willing to offer their own children as sacrifices to heathen gods. In that environment, Abraham teaches one of the great lessons in all of scripture about multiple choice tests.

I talked to a teacher yesterday who has been moved thirteen times during his employment with the Church Education System. He was not bitter, but he was tired. Like most of us, he wanted a place—a permanent place—to call home. Abraham might have felt like that. Following the attempt on his life in the land of Ur of the Chaldees, he moved to Haran, then to Canaan. A famine in the land of Canaan forced Abraham into Egypt, from whence he returned with his family to Canaan, a wealthy man.

Abraham (at this point in his life his name was still Abram) had been promised that the land of Canaan would one day belong to him and to his seed. (See Abraham 2:18,19; Genesis 12:7.) While he and his nephew Lot lived in Canaan following their sojourn in Egypt, the Lord blessed them so abundantly that it became impossible for them to dwell together, for “the land was not able to bear them. . .” (Genesis 13:7.)

And Lot lifted up his eyes, and beheld all the plain of Jordan, that it was well watered every where, before the LORD destroyed Sodom and Gomorrah, even as the garden of the LORD, like the land of Egypt, as thou comest unto Zoar.

Then Lot chose him all the plain of Jordan; and Lot journeyed east: and they separated themselves the one from the other.

2. ABRAHAM RESCUES LOT, PAYS TITHES TO MELCHIZEDEK, AND REFUSES TO ACCEPT THE SPOILS OF WAR FROM THE KING OF SODOM.

Lot chose the fertile plain along the Jordan River valley and left Abram the rocks of upper Canaan. But some time later a confederation of kings attacked the cities of that valley.

And they took all the goods of Sodom and Gomorrah, and all their victuals, and went their way.

When Abraham learned that his relatives had been captured, He armed his trained servants, pursued the invading kings and conquered them.

And he brought back all the goods, and also brought again his brother Lot, and his goods, and the women also, and the people. (Genesis 14:16.)

When he returned, two kings were there to meet him: one was the king of Sodom. Genesis 13:13 tells us that “the men of Sodom were wicked and sinners before the LORD exceedingly.” The other king was Melchizedek, king of Salem. His name is a Hebrew term meaning king of righteousness. And so Abraham returned from his victory to meet two kings: the king of wickedness and the king of righteousness. His experience with them teaches a sublime lesson about multiple choice tests, and about being righteous in a world of wickedness.

And the king of Sodom said unto Abram, Give me the persons, and take the goods to thyself.

And Abram said to the king of Sodom, I have lift up mine hand unto the LORD, the most high God, the possessor of heaven and earth,

Abraham refused anything from the king of wickedness–even, as it were, threads and shoelaces. He had lifted up his hand to the Most High. This sounds like covenant language, and Abraham was, as all of us are, under covenant to choose righteousness rather than evil.

What is a shoelace of wickedness? A thread of immorality or Sabbath breaking? Nephi said something about threads. In a commentary on the last days he spoke of the efforts of Lucifer to destroy the children of God.

And there are also secret combinations, even as in times of old, according to the combinations of the devil, for he is the founder of all these things; yea, the founder of murder, and works of darkness; yea, and he leadeth them by the neck with a flaxen cord, until he bindeth them with his strong cords forever. (2 Nephi 26:22, emphasis added.)

Flax is among the most fragile of natural fibers. Why would Lucifer lead us by the neck with something so fragile and easy to break? For that very reason. Our certainty of our ability to escape at any time encourages us to persist in ways that lead us from safety into danger. And those threads and flaxen cords, unobserved and quietly increasing, may finally become strong cords that bind us forever.

Both Abraham and Nephi seemed to know that the important choices in life are the little ones–the flaxen threads that bind our lives and forge our characters. Elder Boyd K. Packer said

We want our children and their children to know that the choice of life is not between fame and obscurity, nor is the choice between wealth and poverty. The choice is between good and evil, and that is a very different matter indeed. . . .

Our lives are made up of thousands of everyday choices. Over the years these little choices will be bundled together and show clearly what we value. (Boyd K. Packer, “The Choice,” Ensign, Nov. 1980, 21)

It is important to note here that although Abraham refused to accept the tiniest endowment from the king of wickedness, he was willing to give to the king of righteousness.

The message delivered by Abraham to us and to the King of Sodom is soon followed in the scriptures by a serious object lesson.

3. THE LORD DESTROYS SODOM AND GOMORRAH.

Remember that Lot, when he separated from Abraham, made his home in the Jordan River Valley, and “pitched his tent toward Sodom.” (Genesis 13:12.) I think if we were to listen carefully we might hear Abraham asking his nephew a question. “Lot, you are a part of the covenant race of Jehovah. Why on earth would you pitch your tent toward Sodom?”

I have twelve children. All have been teenagers. I think know how Lot would have answered this question: “Abraham, I’m not in Sodom. I’m just close by. It is nice to have a town in the neighborhood in case I need some medicine or want to attend a concert of pick up supplies at 7-11. But I’m not in Sodom.” He might also have said things like, “It’s not that bad. I can handle it.”

And of course he isn’t in Sodom. So why the concern? Because reaching out from centers of iniquity come threads and shoelaces, persuading, inviting, enticing . . . In this context, Sodom may have much in common with your television and the internet.

When messengers came from the Lord to have a look at the iniquity of Sodom, where did they find Lot? He was not living toward Sodom any more. He was in Sodom. (See Genesis 14:12; 19:1-3)

When the Lord told Abraham that He meant to destroy the wicked cities nearby, including Sodom, Abraham was concerned. He had relatives in Sodom. “And Abraham drew near, and said, Wilt thou also destroy the righteous with the wicked?” (Genesis 18:23.) He wondered if the Lord would spare the city if there were fifty righteous. The Lord said He would. In fact, in response to continued appeals from Abraham, the Savior finally agreed to spare Sodom for as few as ten righteous people. Abraham then went home.

And the LORD went his way, as soon as he had left communing with Abraham: and Abraham returned unto his place (Genesis 18:33).

In Jeremiah 5:1 the Lord offered to spare Jerusalem if one righteous man could be found. But Abraham was satisfied with a promise to save Sodom if it were home to only ten godly people. Why? Consider these verses.

And the men said unto Lot, Hast thou here any besides? son in law, and thy sons, and thy daughters, and whatsoever thou hast in the city, bring them out of this place:

For we will destroy this place, because the cry of them is waxen great before the face of the LORD; and the LORD hath sent us to destroy it. (Genesis 19:12-13)

But when the messengers commanded Lot to take his family and leave, he did not leave with nine other family members. Only his wife and his unmarried daughters accompanied him. And they did not escape unscathed. His wife was unable to depart without a backward glance. (Genesis 19:26; Luke 17:31,32 suggests she went back.) She turned into a pillar of salt in the area of the Dead Sea. (For you who have trouble understanding this event, let me share my conviction that such a thing is possible. My wife was driving one day and looked back. She turned into a telephone pole.)

A short time later his daughters committed moral transgressions with their own father. (See Genesis 19:30–36.) Where did they learn such behavior? No doubt the threads and shoelaces of Sodom had become strong cords binding them.

Conclusion: If we expect to pass the test of life as Abraham did, we must exercise great care in the seemingly insignificant choices—the threads and shoelaces—of life, choices like where we decide to pitch our tents. If a visitor were to determine the location of your tent by examining your choice of TV shows and movies, what would he conclude? The tiny, seemingly insignificant choices of life are in fact the very fabric and fiber of our lives.

We are made, as it were, not of boulders, but of the finest grains of sand.

Chemists who are familiar with analyzing matter, inform you that the globe we inhabit is composed of small particles, so small that they cannot be seen with the unaided natural eye, and that one of these small particles may be divided into millions of parts, each part so minute as to be undiscernible by the aid of the finest microscopes. So the walk of man is made up of acts performed from day to day. It is the aggregate of the acts which I perform through life that makes up the conduct that will be exhibited in the day of judgment, and when the books are opened, there will be the life which I have lived for me to look upon, and there also will be the acts of your lives for you to look upon. Do you not know that the building up of the kingdom of God, the gathering of Israel, is to be done by little acts? You breathe one breath at a time; each moment is set apart to its act, and each act to its moment. It is the moments and the little acts that make the sum of the life of man. Let every second, minute, hour, and day we live be spent in doing that which we know to be right. (Brigham Young, Journal of Discourses, Vol.3, p.342.)