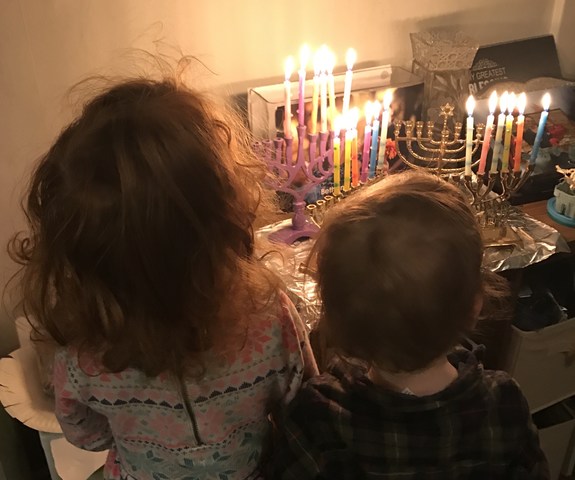 When I was shopping for wedding dresses, I kept hitting a snag: everything flattering showed way too much skin. Outside of the fact that I wouldn’t have been comfortable wearing a halter top in front of both of our families, I also had to work within the modesty constraints of the religious service. And so, despite not being a member of The Church of Jesus Christ of Latter-day Saints myself, I found myself googling “Mormon bridal shop” in an attempt to find an affordable, flattering, and modest gown to wear on the big day.

In an effort to save a few bucks, however, I abandoned that search and found what ended up fitting like a potato sack from a seamstress on Etsy. I learned a valuable lesson: When trying to find modest but cute clothing, it’s better to just be another Orthodox Jewish woman shopping in Mormon boutiques and websites.

Over the years of learning about the Church as well as my own Jewish religion, I’ve come to realize how many similarities there are between the two. As is the case with other individuals of faith, I often find I have more in common with religious Christians, especially Latter-day Saint members, than I do with secular or totally unobservant Jews.

For me, spending time with Latter-day Saint families is much like spending time with other religious Jews. For one, we are both past the point of double strollers (I recently heard from a Latter-day Saint mother about a stroller wagon, because sometimes you need to cart around more than two small kids on wheels!), and we’re okay with that. Whereas my three kids in four years garner stares in the mainstream world, among my Jewish and Latter-day Saint friends, nobody asks us with wide-eyes “Are you guys done yet?” We always answer “No, of course not!” But only other families with a large number of kids understand not feeling “done” having children, even if you already have a boy and a girl. My Latter-day Saint friends don’t ask “Aren’t you tired? Aren’t you broke?” because they know that we are but that we don’t care. Wanting a “large” family is increasingly counter-cultural these days, and it’s nice being among people who understand the blessing of a loud and messy home.

One of the hardest aspects of being observant Jews in a secular world is explaining the self-imposed limitations we live under. It’s hard telling our daughter we can’t go to her friend’s birthday party on a Saturday (our Sabbath) or stopping our son from eating chicken nuggets that their friend at playgroup kindly offered to share with him. While there is some confusion about our dietary restrictions among many other faithful Christians (“Just eat some bacon! God doesn’t care! He made it delicious for a reason!”), we don’t get any of that good-natured teasing among our Latter-day Saint friends because it’s another thing we have in common. Just like they don’t tease us about bacon or shrimp, we don’t tease them about coffee or wine. Bacon and coffee are as American as apple pie and two of the greatest culinary passions of many Americans. Despite this, Jewish and Latter-day Saint members abstain not because we’re masochists but because this is simply what our religions dictate and what we choose to follow. Much like our observations of the Sabbath (Jews on Saturdays, Christians on Sundays), we know we are missing out on events and gatherings, but this purposeful abstention from these worldly pleasures in observance of dietary decisions and weekly days of rest are an important reminder of our faith traditions. They have a purpose, teaching us restraint and reminding us of the commitments our faith traditions demand of us.

Like Latter-Day Saints, Jews are expected to spend time every day studying our holiest texts, and complete a reading of the entire Torah every year, just as many Saints read the Book of Mormon every day, completing the entire text annually. We also have a shared religious tradition in the Torah, or the Old Testament—the foundation of all Judeo-Christian thought. While there are large divergences in theological belief (most notably, that whole Jesus thing), the importance of repentance, a strong family foundation, and certain commandments (such as daily prayer, fasting, the spirit of gratitude and the importance of charity and chastity) are familiar to those of the Jewish faith.

Unfortunately, the similarities between our two communities aren’t all positive or filled with ritual observance that enriches our lives. Unlike many other religions, the history of both the Jewish people and those of the Church of Jesus Christ of Latter-day Saints is filled with bloodshed, discrimination, and martyrs. Few others understand the visceral hatred that can be, and often is, sent in our directions, whether it be online or in person. We Jews joke that most of our holidays are centered around “They tried to kill us but they failed, and either let’s eat or let’s fast!” There are plenty of days on the calendar for Latter-day Saints marking tragedy as well, and sites across the American frontier mark little-known massacres and martyrdoms. This shared history of persecution has a way of bonding our people—even when it feels like the rest of the world is against us, we should know we have a shared kinship with each other.

Among my friends, I’m always known for being on the lookout for new Latter-day Saint friends that I can make. I don’t want to just be friends with Jews, because there are so many different people and perspectives in the world that I can benefit from. But it’s also nice knowing that no matter what, if I meet a Latter-day Saint member, we are already starting out with a lot of common ground.

Bethany Mandel is a writer and homeschooling mother of three living in the D.C. area.