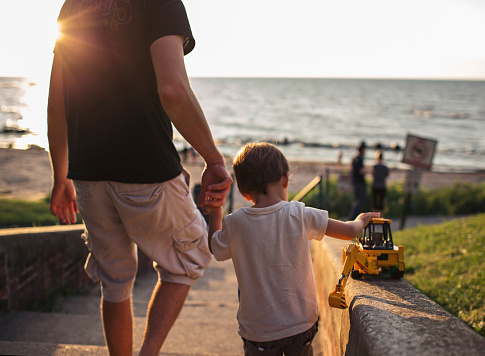 If you thought you worried a lot before you became a dad—just wait. I never knew what true worry was until I became a dad. Sure, I had various situations that made me fearful and apprehensive in my life, but from the minute I had those little souls placed under my stewardship, my worries compounded exponentially. But, so did my joy and sense of purpose.

People always fear the things they can’t control. Every dad knows that they can never truly control their kids. Maybe they can rein them in when they are young, but once they mature and start claiming their God-given freedom, all you can do is hope that you’ve trained them in such a way that leads them to make good decisions with their life.

►You may also like: Greg Trimble: God Was "Done 'Nudging' Me"—The Decision That Changed This LDS Blogger's Life

A dad’s biggest fear consists of a desire for his kids to live up to—not fall short of—their divine potential. He doesn’t want to see his kids suffer from making bad decisions, or see them leave an opportunity to attain happiness. But some dads think that they can micromanage their way into raising perfect kids. Sometimes a father loves his kids so much that he tries to force them into lifestyle choices that he believes will make his kids happy and successful. We’ve seen it all before; a dad gets it in his head that his son or daughter should go to such and such a school, play such and such a sport, or master such and such an instrument. He’s determined that the best course of action for his child is for them to become a doctor or a lawyer, a dentist or an accountant. He goes to great lengths to set up a career path that will meet his expectations. He does all of this out of love, but also out of fear. He fears that his innocent, ignorant, and immature child will not make the sort of choices that will lead them to happiness, and therefore, this dad will step in and effectually pave the way to what he perceives as success. But what if the dad’s perception of happiness is completely different from his child’s perception of happiness? His assumptions and coercions could prove counterproductive, even disastrous, in the life of that child.

Similarly, we’ve all seen dads who try to live through their kids. They push them so hard that the kids forget to enjoy the activity that they once loved. All you need to do is head out to your local baseball fields to find a host of “little league dads” who are belligerently trying to make up for what they lacked in talent when they were young or relive their own glory days. I’ve watched good kids stand there and watch their dads get into fights with other dads and umpires over trivial things. This sort of behavior ends up making their kids’ lives miserable and drives a wedge of resentment between the father and the child—resentment that doesn’t manifest itself until the child has grown. At that point, the damage is done and the reversal of those feelings is difficult.

I grew up playing competitive baseball from ages four to twenty-two, until I served a mission—leaving behind a college scholarship and some interest from some major league scouts on the table. I always thought my son would also end up playing competitive baseball and be just like his old man (but better). I figured it would be “in his blood” to pick ground balls, steal bases, and hit gap shots. I would get so amped up when I’d see him get out there on that mound and strike people out. At age seven, he made his little league all-star team—and then innocently let me know that he didn’t care whether he played ball or not. I never wanted to be one of those dads who drove his kids to do something that they didn’t want to do. Now he plays the violin and the guitar; he swims, surfs, and performs with the world-class Millennial Choirs and Orchestras—and he’s loving life. Do I still lose my mind at the smell of a baseball glove, the crack of a bat, or the feeling of freshly cut grass and neatly dragged dirt? Of course I do. But it doesn’t come close to seeing his beaming face sing his heart out and bless others with music in the various concert halls across America.

The key is to create a happy medium, in which we’re not forcing our kids into living the life that we think they should live. It’s giving our kids the tools to help them gravitate toward the things that they are good at. The things they enjoy. The things that they want to excel at and share with the world. It does no good to force a mathematician to be an artist, an entrepreneur to be a dentist or a soccer player to be a golfer. Sometimes the fear we have over how our children will turn out can actually hurt them instead of help them to succeed. So, we should give them opportunities to find themselves, and then we stand by their side, ready to give counsel along the way. Whatever they choose to do, it does no good to criticize them for it. It will only cause them to want to do that thing more. So instead, we should make sure to support, enjoy, and encourage them in their endeavors for as long as they will allow us to stand by their side.

Viral blogger Greg Trimble has reached millions through his blog by writing about topics he's passionate about. But when it's all said and done, he feels most passionate about being a dad. In his debut book, Greg approaches fatherhood in a way that is fun and easy to understand. By drawing upon the wisdom of some of the world's greatest dads, Greg is able to help future dads, new dads, and even seasoned dads leave a legacy, be remembered, and be a hero to their families.