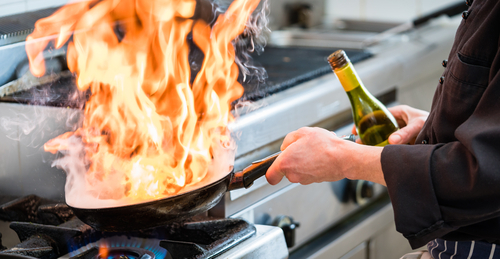 Poll: Do You Cook with Alcohol?

A few years ago I was looking through a cookbook, and I paused as I came across an unfamiliar and potentially intriguing ingredient: Ariel dealcoholized Cabernet Sauvignon. “Dealcoholized wine?” I thought. “I need to look this up and see if it’s for real.” Sure enough, I found that a company called Ariel produces non-alcoholic wine. In the five years since I started cooking as a hobby, I had never seen anything like it.

I looked over the frequently asked questions, wondering how this feat could be done (and why wouldn’t it just be called grape juice?), and a familiar debate came up in my mind: is cooking with alcohol bad?

This topic cropped up again in comments from LDS Living readers. I had already been wanting to write about it, and the comments showed that there’s definitely interest in discussing this topic.

Now for the admission: I cook with wine. (I have not cooked with other alcohols, simply because I’ve never found a recipe I wanted to try that had another kind of alcohol.) My experience is that wine gives dishes a significant boost in flavor, and since the alcohol cooks off with enough simmering or baking time, I don’t see a problem with it. We regularly eat uncooked foods flavored with vanilla (which typically has 35 percent alcohol), so what’s the deal?

But I know some cooks who enjoy cooking great food that will not use wine. Some even go so far as to use substitutions for vanilla. And I know that, as much as you cook a dish, the alcohol never cooks out 100 percent. So tell me: do you cook with alcohol? Take the poll below!