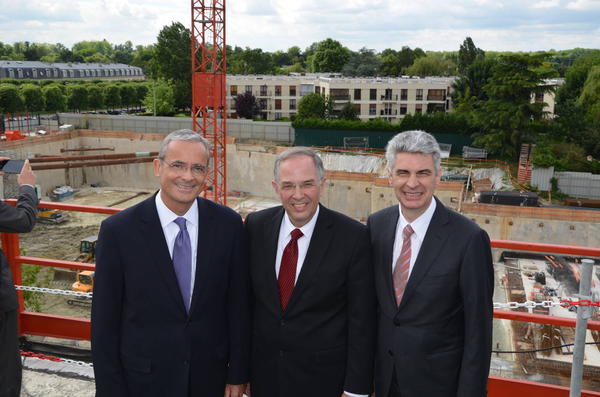 The Paris France Temple is rising as a prophecy in fulfillment.

During a meeting in Paris in 1998, President Gordon B. Hinckley told some 2,400 Latter-day Saints, “The time will come … when we can construct somewhere in this area a house of the Lord, a sacred temple. …”

Returning to Paris six years later, in 2004 when a temple site had yet to be found, President Hinckley said, “Sometime in the future, a beautiful house of the Lord will grace this land.” On both visits, President Hinckley asked the members to pray that the Lord would direct Church leaders to the appropriate site for the temple. That site was found in 2009 in Le Chesnay, a city of some 30,000. The temple is under construction. The grounds of the temple are about 200 meters from the grounds of the Château de Versailles, one of France’s most famous landmarks.

Elder Neil L. Andersen of the Quorum of the Twelve Apostles, Bishop Gérald Caussé of the Presiding Bishopric and Elder Patrick Kearon of the Seventy and a counselor in the Europe Area visited France June 10-14. On June 13, they went to the temple site and met in the LDS chapel in Versailles with about 60 people — most of whom are not Latter-day Saints — who are involved in the construction of the temple. The group included architects, lawyers, builders, contractors, construction company representatives and others.