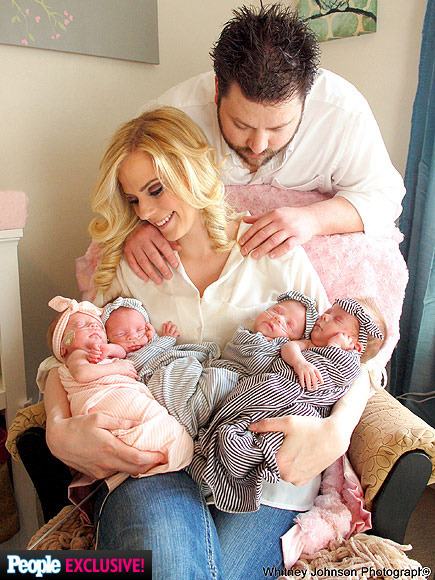 After eight years of trying to conceive, Ashley and Tyson Gardner would have been happy leaving the hospital with one infant son or daughter. Now, the American Fork, Utah, couple is celebrating their first few nights at home with not one but four newborn girls, conceived last summer with the help of IVF treatments.

Doctors placed the odds of a successful pregnancy with one baby at less than 40 percent for Ashley, who had been diagnosed with endometriosis. Last July 23, Ashley learned that she was pregnant with two sets of identical twins – a one-in-a-million chance according to her fertility specialist. The Gardners have chronicled their story for friends, family and the public on social media.

Now Ashley and Tyson are spending sleepless nights at home with Indie, Esme, Scarlett and Evangeline for the first time since the babies were born at 29 weeks on Dec. 28, 2014. The couple spoke exclusively with PEOPLE about the day they'd dreamed about for almost a decade.

"It's so wonderful to start our lives together and have all of us under the same roof," says Ashley. The couple went back and forth to Utah Valley Medical Center's newborn intensive care unit until the babies were released over the last several weeks – they went home one at a time as they gained weight. "I feel like everything has been on hold for so long," Ashley says. "Finally, we feel like a real family."