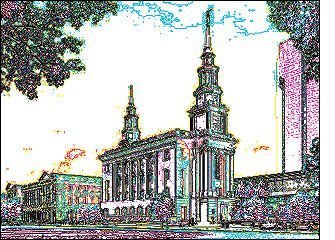 When it comes to church or temple architecture, Mormons have it all over Catholics and mega-church Protestants, whose modern churches frequently overemphasize cold, hard lines and sterility.

The proposed Mormon temple at 18th and Vine Streets near the Philadelphia Parkway won’t be a utilitarian warehouse. The design is one of many temple designs currently in use throughout the Mormon world. Currently there are 133 Mormon Temples in operation. When the Philadelphia Temple is completed, that number will rank in the high 130s. The Temple will have two spires, one hosting an image of the Angel Moroni, the angel whom, according to Mormon belief, appeared to Mormon founder Joseph Smith in Palmyra, New York, sometime after Smith asked God which church he should join.

Read the rest of this story at weeklypress.com