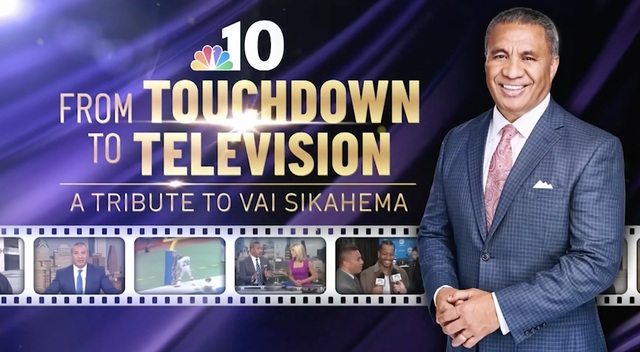 In May 2019, following his call as an Area Seventy in The Church of Jesus Christ of Latter-day Saints, Elder Vai Sikahema told Deseret News columnist Doug Robinson, “I’m willing to give everything I’ve got, and I just don’t know if it’s enough. I don’t have the gilded résumé.”

“Sikahema went on to explain that many leaders in the church have MBAs and Ivy League educations; many were captains of industry, with managerial experience leading big companies, or professionals who had ascended to the top of their professions,” Robinson wrote. But the reality is that, while Sikahema may not consider himself up to par, when he retired late last year Philadelphia’s NBC10 devoted 40 minutes of airtime to the man who came to their city as Philadelphia Eagle and stayed for over 26 years.

“I’ve raised my kids here. I became a grandfather while living and working in Philadelphia,” Elder Sikahema says in a video segment about his life’s journey. “But now it’s time to begin the next chapter of my life and it has to do with a higher calling that’s central to who I am.”

And when invited to share the next step in his life, Elder Sikahema says, “I read scripture every day. Every day I read from the Book of Mormon and I read from the Bible. And I’ve done it [since I was] a child. It helps informs the decisions that I make in my life—daily and also the big ones like retirement and I just like it was the right time and I felt prompted to do that.”

Elder Sikahema also bore his testimony of the temples and shared why his faith means so much to him.

“My church work just feels more and more rewarding. It’s probably a function of our age and where we are in our lives,” he said in an interview with his wife, Kaela, outside of Latter-day Saint chapel. “But I just feel like there’s more for me to give there and there’s not that much more for me to give in my professional life.”