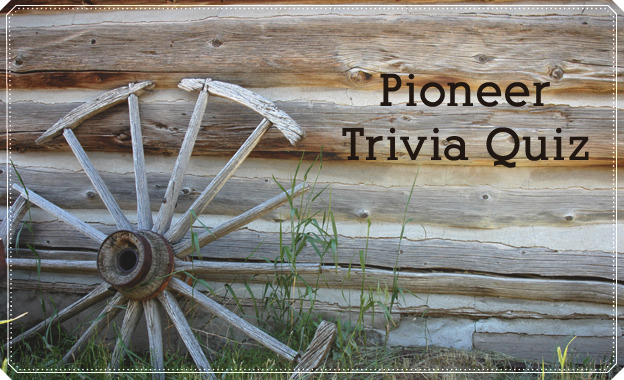 1. What on the trail east of the Rocky Mountains were so numerous that the pioneers had to send advance parties ahead to clear the trail so the teams could pass?
A) Bison herds
B) Prairie dogs
C) Tumbleweed
D) Deer

2. Who was the first convert to travel to America?
A) William Garner
B) Parley P. Pratt
C) Alexander Doniphan
D) Miles Romney

3. For leading the migration across the United States, what biblical prophet is Brigham Young often compared to?
A) Noah
B) Moses
C) Abraham
D) Peter

5. When did the parties begin to migrate?﻿

8. What was the name of the ship Samuel Brannan was commissioned by church elders to charter from the eastern United States to California, in an attempt to avert much of the persecution the pioneers encountered?
A) Messenger and Advocate
B) Portsmouth
C) Prophet
D) Brooklyn

10. What is the common label for a street down which pioneers walked following mob oppression, forcing them to leave a city they had built?
A) “Street of Tears”
B) "Trail of Hope"

1. A: In first seeing the bison in May 1847, four wagon loads of meat and a feast was secured after the pioneers saw the bison. Originally the animal had ranged from the Appalachians, but by 1820 had been killed off east of the Missouri River—200 miles west of where the pioneers found them.

2. A: Garner was an English heavyweight champion when he met the first Mormon missionaries to the British Isles in 1837. Having sufficient means to migrate immediately after conversion, he crossed the Atlantic Ocean to the United States before the first boatload of converts who later came on the ship Brittania.

3. B: After leading the Church across the United States (and beyond) as Moses led the children of Israel out of Egypt to Canaan, Brother Brigham then led a 30-year battle with the U.S. government for control of Utah, Like the Old Testament prophet, President Young also, as Leonard Arrington writes, “led his people figuratively and quite literally, and they survived because of that leadership and their faith.”

4. D: The pioneers were among 500,000 emigrants during the 1800s that crossed the Western plains hoping to find a new and better life, for a variety of reasons. In 1997, Utah and the Church celebrated the Sesquicentennial of the Mormon migration to honor the thousands of pioneers who made the trek to Utah.

5. D: After embarking on March 1, the plan was to reach and cross the Missouri River by mid-April. A “swift company” of select men would ride hard over the Rocky Mountains to their final destination to make preparations for a new life in the valley of the Great Salt Lake in July 1847.

7. C: The completion of the railroad put an end to the need for handcart companies. More than 250 organized companies transported over 60,000 pioneers to Deseret.

8. D: Joining Brannon on board were 238 fellow Saints with their sights set on the Mexican territory of California, where they hoped to build a society without the conflicts they had experienced in the United States. During the six months the Brooklyn was at sea, the United States went to war with Mexico, leaving Americans in control of California when the Brooklyn entered the San Francisco Bay.

9. B: Through Missouri Executive Order 44, the state militia and other authorities used Boggs’ directive to expel the Saints from their lands in the state, where Church members wouldn’t return for 25 years. It wasn’t until 1976 that the order was rescinded, when Missouri Governor Kit Bond declared its unconstitutional nature.

10. B: "Trail of Hope." On Feb. 4, 1846, the Saints were driven from their homes in Nauvoo. The day was so cold that the Mississippi River froze over, which allowed them to cross, though in severe weather.

How many did you get right? Leave a comment below!