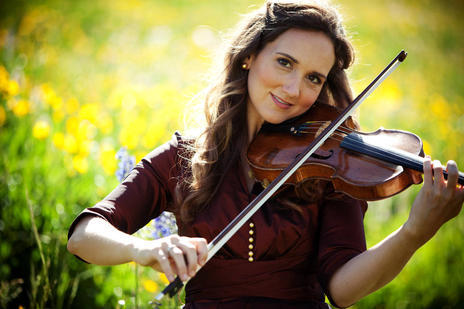 For a woman who worried that her music career might be finished after she quit a sweet gig with the National Symphony Orchestra, Jenny Oaks Baker has remained remarkably busy.

A Grammy-nominated, Juilliard-trained violinist from Utah, she performs 60 to 75 concerts a year. This year she will perform everywhere from Alexandria, Virginia, to Snowflake, Arizona, not to mention, Dallas, Baltimore, Phoenix, Birmingham, Madison, Seattle and Orem, where she will be a guest soloist with the Utah Symphony on June 23.

Musicians don’t quit the NSO at 31 any more than football players leave the New England Patriots at the height of their game. She had been with the NSO seven years when she left to be a full-time mother to her four children, all under the age of 5. She still wanted to perform on her terms, but she didn’t have a single concert scheduled. “It was scary,” she says. On the very day she quit, the calls began with offers of work.