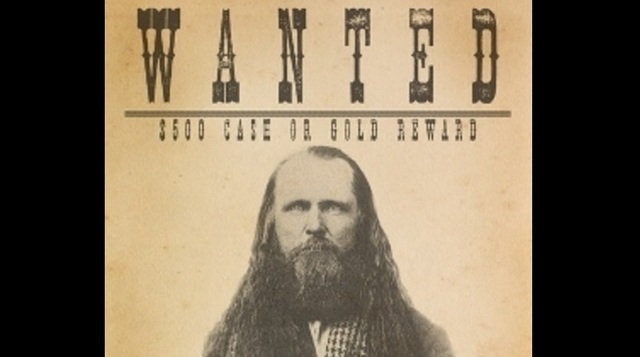 The Gunslinging General Authority Who Went to Prison on the Prophet's Orders: 7 Unbelievable Facts About Porter Rockwell

A notorious gunslinger, wanted man, and devout Church member, Orrin Porter Rockwell led a life of paradox.  His lethal accuracy with a shotgun and policy to “always shoot first . . . that way they know you’re armed” made his time as a lawman controversial at best.  Charged with murder or attempted murder on three occasions, Porter was acquitted twice and died before the last charge could come to courts.  Despite his rough-and-tumble attitude, Porter Rockwell remained unshakably faithful to the Church and its leaders until his death in June 1878, serving as a body guard to Joseph Smith and Brigham Young.  The incongruities and myths surrounding Rockwell’s life have drawn the fascination of Mormons and non-Mormons alike.  But here are a few curious tidbits you might not have known about Orrin Porter Rockwell.

1. He was known as the “Destroying Angel”

Porter Rockwell killed more outlaws than Wyatt Earp, Doc Holladay, Tom Horn, and Bat Masterson combined, earning him the menacing title, the “Destroying Angel.”  Rockwell’s hawk-like vision was so acute he could spot landmarks along the trail days before his fellow pioneers. His accuracy was so deadly he once shot a bank robber attempting to escape on horseback in the pitch-black of night.  It didn’t take long for Rockwell’s legendary abilities to draw the attention, and sometimes even the competition, of outlaws all throughout the Wild West.

Porter Rockwell and Joseph Smith grew up on neighboring farms in Palmyra, New York. Despite their eight years difference in age, both men had a noticeable limp that cemented their close friendship—Joseph’s resulted from a childhood surgery and Rockwell’s resulted from an improperly set bone that left one leg two inches shorter than the other.  When Joseph became imprisoned at Liberty Jail, Rockwell served as his personal messenger and smuggler, sneaking two augers into the jail that the prophet used to chisel a hole through the four-foot wall.  When Joseph Smith was finally released from Liberty Jail, he had progressed so far in his digging that only a few inches stood between the inmates and freedom. Rockwell remained close to Joseph until the end of the Prophet’s life, saying when he learned of Joseph’s death, “They killed the only friend I ever had.”

3. He never cut his hair or beard

After a nine-month stint in Missouri awaiting trial for the attempted assassination of Governor Lilburn Boggs (the same Governor Boggs who signed the Mormon extermination order), Porter Rockwell showed up at Joseph Smith’s house in Nauvoo on Christmas night, shaggy and skeletal.  Joseph Smith ordered the gruff-looking ruffian out only to find it was his childhood friend, Porter Rockwell.  After hearing Rockwell’s story, Joseph Smith made a Samson-like prophecy: as long as Rockwell did not cut his hair and remained faithful to the Gospel, his enemies could never touch him.  Rockwell lived by the prophet’s promise, cutting his hair only once to make a wig for Joseph’s widowed sister-in-law recovering from typhoid fever.  And until his dying day, the prophecy held true for Rockwell who escaped dozens of showdowns with notable marksmen without a scratch.  On one such occasion, sharp-shooter Loren Dibble unloaded both his guns at Rockwell on Lehi Main Street in broad daylight without even ruffling Rockwell’s composure.

(Rockwell always professed his innocence in the Governor Boggs’ assassination attempt, using as his evidence, “I’ve never shot at anybody.  If I shoot, they get shot.  He’s still alive, isn’t he?”)

4. He went to jail on the prophet's orders

Though a trail blazer for the pioneer’s moving west, Rockwell returned to Nauvoo on an unusual mission for Brigham Young: to shift persecution from the poverty stricken Saints left behind to himself.  Rockwell was to accomplish this feat by getting arrested for the murder of Frank Worrell, a man Rockwell shot in self-defense while serving as a deputy.  Despite his previous harrowing imprisonment and acquittal, Rockwell obeyed the prophet’s wishes to their fullest.  In a stunt crazy enough to capture everyone’s attention, Rockwell barricaded himself in an old boardinghouse after chasing an old enemy through Nauvoo’s streets while firing his pistols above the man’s head.  The plan worked: the Saints remained peacefully in Nauvoo until the spring and Rockwell was acquitted.

5. He was involved in the mysterious Aiken brother murders

While Rockwell insisted he “never killed anyone who didn’t need killing,” several murky incidences clouded his reputation as a deputy and later as a sheriff in Utah.  Among these cases was the mysterious murder of the Aiken brothers.  Charged by Brigham Young with the duty to slow down Johnson’s army using any nonviolent means necessary, Rockwell spent a number of nights on the plains knocking out wheel pins and scattering horses.  But as the encroaching army neared its target, tensions rose to a furious pitch.  The Aiken brothers arrived in Utah on friendly terms with the army and with the intent to set up a gambling house and brothel for the soldiers.  Afraid the Aiken brothers knew too much about Mormon preparations against the army, Brigham Young charged Rockwell to escort four of the brothers back to California.  Two of the brothers reappeared in Nephi days later, blood-smeared and tattered.  Apparently, their two brothers had been killed somewhere in the desert between Nevada and Utah.  The two remaining brothers were later killed as they attempted to return to Salt Lake.  Some blamed the deaths on Indians, others condemned Porter Rockwell, but the truth is, the murder of the Aiken brothers remains a mystery to this day.

After stealing a horse from outside the bishop’s house, Lot Huntington—nephew to Brigham Young—fled to Camp Floyd where he met up with two other petty outlaws.  An expert tracker, Rockwell followed the trail all the way to a Pony Express station in Tooele, arriving in the middle of the night.  At sunup, the situation quickly escalated into a standoff.  The outcome: Lot Huntington tried taking on Porter Rockwell and ended up shot clean through the heart.

7. He was a faithful Mormon to the end of his life

Despite his no-nonsense demeanor and shady past, Porter Rockwell was a faithful member of the Church until the day he died.  He was one of the first members of the Church, baptized in the June of 1830 just a few months after the Church was organized.  Later in his life, he was ordained as a member of the Seventy and held the position throughout his life.  Amidst the slander and accusations stirred up by his sudden death on June 9, 1878, President Joseph F. Smith praised Porter Rockwell in his eulogy, saying, “They say he was a murderer; if he was he was the friend of Joseph Smith and Brigham Young, and he was faithful to them, and to his covenants, and he has gone to Heaven . . . clothed with immortality and eternal life, and crowned with all glory which belongs to a departed saint.”

For more intriguing facts about Porter Rockwell and other notorious Mormon outlaws, check out Butch Cassidy and other Mormon Outlaws of the Old West at deseretbook.com.