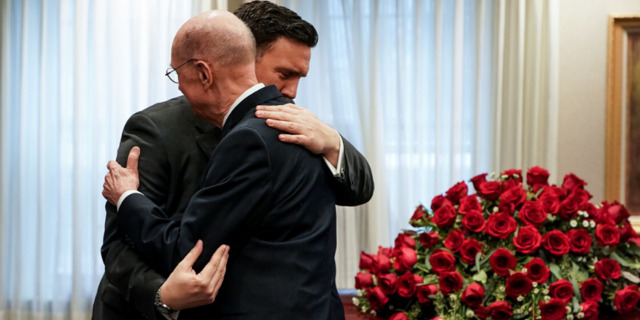 While on the earth, Clayton Christensen found member missionary work to be “a source of deep happiness.”

“Every time you take someone figuratively by the hand and introduce him or her to Jesus Christ, you will feel how deeply our Savior loves you and loves the person whose hand is in yours,” he wrote in his book, The Power of Everyday Missionaries.

And according to President Henry B. Eyring, Christensen is still enjoying that deep joy on the other side.

President Eyring, second counselor in the First Presidency of The Church of Jesus Christ of Latter-day Saints, spoke at Christensen’s funeral on Saturday, February 1, according to Deseret News.

President Eyring testified that Christensen is in the spirit world and joys in his assignment there to share the gospel.

“Can you imagine if you were trying to run the mission among the spirits in prison if Clayton Christensen arrived?” President Eyring said. “Do you have any idea?”

“I pray that the Holy Ghost will help you with the nostalgia and the feelings of loss, but I pray that He will let you feel the joy and the power of what he’s now doing and will do.”

► Related Content: "Beyond That Old Horizon": What My Uncle Clayton Christensen Taught Me About This Life and The Next

Christensen’s five children also spoke at the funeral. His son, Michael, shared a story about his father’s first teaching job at Harvard. The job wasn’t going well until a man on a plane encouraged him to teach with greater love. Christensen went to his office and prayed that his students would feel God's love through his teaching.

“These prayers were answered,” Michael said. “It didn’t matter if dad was teaching students about supply chains, manufacturing job shops or disruptive innovation, somehow his students could feel a sense of love in those classrooms, and not just dad’s love for his students, but something greater.”

Over 800 people attended the funeral, including Boston Celtics President and General Manager Danny Ainge. Ainge spoke of how Christensen's example of unabashedly sharing his faith gave the NBA executive courage to do that same.

“The thing that I have thought of this past week, since he left us, was his impact on me as a young member of The Church of Jesus Christ of Latter-day Saints,” Ainge said as he waited in line for the viewing. “How bold and powerful and strong Clayton Christensen was in the Boston area gave me a lot of strength and confidence in being more open with my faith.”