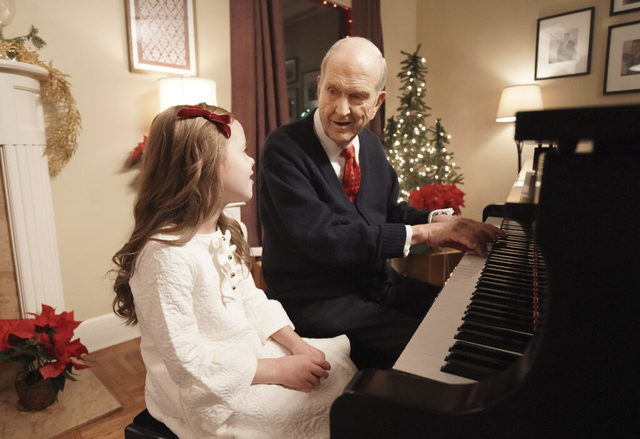 Seven-year-old Claire Crosby has had some pretty neat experiences over the past four years since her performance of “Gethsemane” went viral and garnered over 14 million views on YouTube. But her most recent video collaboration with President Russell M. Nelson tops the list, according to her father, Dave Crosby.

“When this opportunity presented itself we knew it would be the most special,” Dave told Church News.

During the filming, President Nelson, who accompanies Claire on “Silent Night” in the video, asked if she had any questions for him. After a discussion about favorite colors, Claire asked, “Do you know what the Holy Ghost feels like?”

Church News editor Sarah Jane Weaver reported President Nelson’s reply: “Sometimes you get an idea in your mind and you wonder where did that come from. Often it is Heavenly Father trying to teach us through the Holy Ghost something we hadn’t been thinking of. Something really wonderful. Like, maybe I should go give my mom a hand with the dishes or with the baby. Or maybe I should go help my dad tune up his guitar. Lots of times we think the ideas are from ourselves, but they are really given to us through the Holy Ghost. It is wonderful. It is a great gift.”

The video was filmed in the Salt Lake City home where President Nelson and his first wife, Dantzel, raised their children.

President Nelson’s Facebook account shared the Prophet’s feelings about his experience with the Crosby family and added his testimony of the power of Christmas music.

“Music is such a powerful form of worship, and that reality is never clearer than during the Christmas season when we enjoy beautiful carols that testify of the risen Lord,” the post said. “This December I hope you will make time with family and friends to enjoy the glorious music of this season. Merry Christmas!”