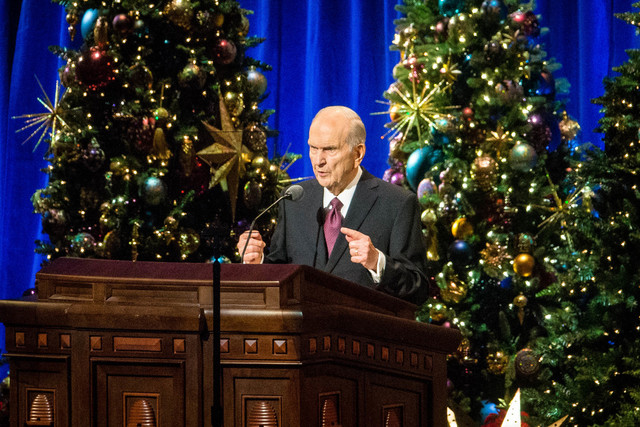 Throughout his service in the Church, President Nelson has often spoken of our Savior and the sacred night of His birth. Here are a few of President Nelson's teachings on the topic, excerpted from the new book Teachings of Russell M. Nelson.

This is part of an ongoing series where we highlight the teachings of our prophet weekly.

The word angel is very meaningful. It comes to us from the Greek language. The Greek word ΑΓΓΕΛΟΣ means “messenger.” This same noun is centered in the Greek word for gospel, which is ΕΥΑΓΓΕΛΙΟΝ. Its literal meaning is “good message” or “good news,” with an implication of a heavenly or angelic source. ΕΥΑΓΓΕΛΙΟΝ is the very first word in the Greek New Testament (“Gospel according to Matthew”).

At Christmastime, we speak of angels when we review the sweet story about shepherds who were tending their flocks by night: “And the angel [of the Lord] said unto them, Fear not: for, behold, I bring you good tidings of great joy, which shall be to all people. For unto you is born this day in the city of David a Saviour, which is Christ the Lord” (Luke 2:10–11).

The King James translators used five words, “I bring you good tidings,” to express in English the meaning of a single word in the Greek text. That one Greek word is ΕΥΑΓΓΕΛΙΖΟ, which literally means, “I announce good news.” That good news is the gospel. That good news is Jesus Christ! He has come into the world. Notice in the center of the word ΕΥΑΓΓΕΛΙΖΟ is the root, ΑΓΓΕΛ, from the Greek word ΑΓΓΕΛΟΣ, for heavenly messenger, or angel.

In homes throughout the modern world, stockings are still “hung by the chimney with care in hopes that St. Nicholas soon would be there” (“A Visit from St. Nicholas,” Clement Clarke Moore). But, oddly enough, one stocking seems to be missing. Perhaps it has never even been considered. I speak of a stocking for the Babe of Bethlehem. Of all people central to the Christmas scene, only His stocking seems to have been forgotten. It doesn’t seem quite right, inasmuch as it is His birthday that we are celebrating.

Just as there was no room for the Christ child at the inn at the time of His birth, with so many people, there is no place for Him in their hearts. The world He came to save has been so filled with trivia that little room has been left for the Lord and His righteousness. Many people have made room for sports and recreation, trinkets and toys, but the Prince of Peace—the Savior of mankind—is often forgotten.

At Christmastime we exchange gifts, but what have we done to show our appreciation to Him who created the entire earth with all of its beauty and abundance? How could we ignore Him who gave us life and all that sustains life? These priceless gifts come from Him. Wouldn’t it be nice if we could improve our ways—as a gift to Him at Christmastime? If His stocking has been empty in our minds, what could we now give? (“Gifts for an Empty Stocking,” Combined Yale Wards Christmas Message, December 22, 1996)

As a special witness of the name of Jesus Christ, I would like to teach and testify of His divine mission. I would like you to know Him and love Him as I do.

Instead, He selected a land stark and arid, made holy by His presence there. He did so for many reasons, including His desire to teach with unique geographical visual aids, and, of course, to fulfill scriptural prophecy.

He chose a land where nomads dwell, living in tents as portable as the sheep and goats that they tend. He chose to be born in Bethlehem, adjoining Jerusalem. This He did to teach symbolically and to fulfill scriptural prophecy. Years before this event, the prophet Micah foretold: “But thou, Bethlehem . . . though thou be little among the thousands of Judah, yet out of thee shall he come forth unto me that is to be ruler in Israel; whose goings forth have been from old, from everlasting” (Micah 5:2). . . .

But why among the animals? He, whom John declared to be the “Lamb of God” (John 1:29), was born during the season of Passover amongst the animals, as were other lambs being prepared for paschal sacrifice.

At the birth of Him who once identified Himself as the “bright and morning star” (Revelation 22:16), a new star appeared in the heavens (see Matthew 2:2; 3 Nephi 1:21). Then shining brightly over Bethlehem, that star had been placed in orbit far in advance of the foretold event in order that its light could coincide both in time and place with His blessed birth.

At the arrival of Him who is called “the light of the world” (John 8:12), darkness was banished worldwide as a sign of His holy birth (see 3 Nephi 1:15, 19). Christ the Savior was born, the Son of God and the Son of a virgin mother, as foretold by Isaiah (see Isaiah 7:14) and other prophets.

The place of His birth had to be in close proximity to Egypt in order to fulfill other scriptural prophecies. Shortly after His birth, Jesus was taken to Egypt, comparable to travels of earlier Israelites. The sojourn of the Holy Child in Egypt fulfilled the prophecy recorded in Hosea 11:1: “I called my son out of Egypt.” That this scripture truly pertained to the Savior was affirmed by Matthew: “[Joseph] took the young child and his mother by night, and departed into Egypt: . . . that it might be fulfilled which was spoken of the Lord by the prophet, saying, Out of Egypt have I called my son” (Matthew 2:14–15).

But He didn’t stay in the spiritual darkness of Egypt very long. As a child, the Savior was brought to the village of Nazareth. Why Nazareth? Again to fulfill prophecy. Jeremiah foretold: “Behold, the days come, saith the Lord, that I will raise unto David a righteous Branch, and a King shall reign and prosper” (Jeremiah 23:5).

I am intrigued with the symbolic significance of the fact that the word Nazareth is derived from the Hebrew word neser, which means “branch.” Jesus, the divine Branch, was to be reared in the place with the name meaning “branch.” Jeremiah further prophesied that God would “cause the Branch of righteousness to grow up unto David; and he shall execute judgment and righteousness in the land” (Jeremiah 33:15). (“Why Palestine?” Missionary Training Center, October 11, 1994)

The Miracle of Our Savior’s Life

Jesus came to the earth to do what we could not do for ourselves. He brought hope, peace, light, and understanding to a dark and ignorant world. The miracle of His Resurrection gives real meaning to His birth. The great message of Christmas is not in the birth of Jesus Christ but in His death for us. The message of Christmas would be nothing without the message of Easter. But our knowledge of the Savior and Redeemer is meaningless unless we obey Him, keep His commandments, and qualify for all the blessings that He has in store for the faithful. (“Sights, Sounds, and Significance of Christmas,” Missionary Training Center, December 16, 1997) 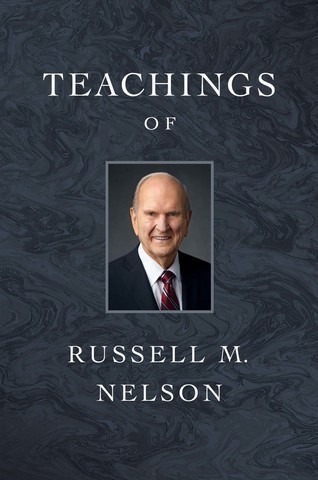