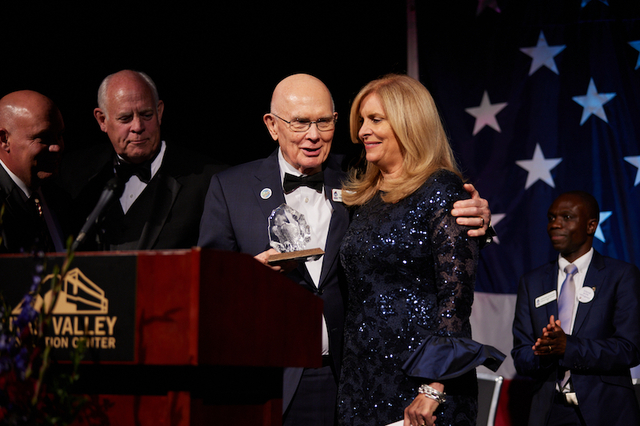 byNewsroom of The Church of Jesus Christ of Latter-day Saints | Jul. 02, 2021

President Dallin H. Oaks of the First Presidency of The Church of Jesus Christ of Latter-day Saints was honored on Thursday, July 1, 2021, for his lifelong work to promote the values of God, family, freedom, and country.

The award was given at the Utah Valley Convention Center by America’s Freedom Festival at Provo, a local nonprofit.

President Oaks, 88, has served as a member of the Quorum of the Twelve Apostles (1984–present) and the First Presidency (2018–present) for a combined 37 years. During that time, he has given many speeches in favor of religious freedom.

After accepting the award, President Oaks spoke briefly about the importance of both upholding and improving the imperfect but resilient United States Constitution.

“Our original Constitution, adopted in 1787, had what our distinguished [former] Secretary of State Condoleezza Rice, herself a member of our most prominent minority, called some ‘birth defects,’” President Oaks said. “Nevertheless, it was our best hope for freedom and self-government. It remains so. Let us be united to defend the great principles of the United States Constitution and to use our precious freedoms to further the work of our faith and to serve our fellow men.”

Even with his decades spent in the defense of freedom, President Oaks said this award mostly represents the accomplishments of others—Deity the most important among them.

“Almighty God . . . has given us our inspired United States Constitution,” he said. “He acted through the wisdom and courage of our Founding Fathers.”

The video below honoring President Oaks was shown at the Freedom Awards Gala, an event organized by America’s Freedom Festival at Provo.

President Oaks’s previous honors for his defense of freedom include the Becket Fund’s prestigious Canterbury Medal (named after one of history’s most dramatic religious liberty battles), which he received in 2013.

President Oaks’ professional life included practicing law in Chicago and teaching for 10 years at the University of Chicago Law School. He was president of Brigham Young University from 1971 to 1980. He later served as a justice on the Utah Supreme Court from 1980 until his resignation in 1984 to accept his call to the apostleship.

Thursday night’s other honorees were Leonard Bagalwa, a native of the Democratic Republic of the Congo and founder of Utah Valley Refugee Foundation, and the five Puro sisters, natives of Utah who have each served in the military. You can learn more about them at freedomfestival.org.

America FreedomAmerica,Freedom,
Comments and feedback can be sent to feedback@ldsliving.com