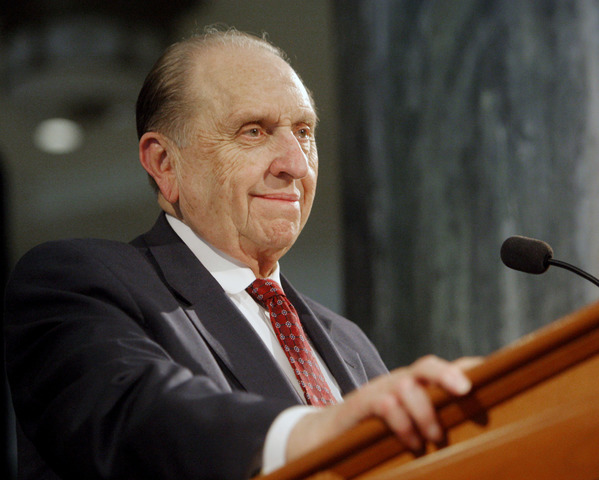 Leaders from Utah and around the world have responded to the death of LDS Church President Thomas S. Monson, who passed away on Tuesday night.

Here are the reactions so far:

"Melania and I are deeply saddened by the death of Thomas S. Monson, a beloved President of the Church of Jesus Christ of Latter-day Saints. While serving for over half a century in the leadership of his church, President Monson demonstrated wisdom, inspired leadership, and great compassion. Considered a prophet by the nearly 16 million members of the LDS Church, his message was one of optimism, forgiveness, and faith. Our thoughts and prayers are with his three children and the rest of the Monson family."

“I love President Thomas S. Monson, and I will miss him. Throughout my life, he has been an example of selfless service and visionary leadership. When I was a young leader of a Latter-day Saint congregation, I looked to President Monson for inspiration and was blessed by his example, and I have continued to look to him for spiritual guidance. His life was a living illustration of individual ministry to the lonely and the downtrodden. His example moved me then, as it does now, to come to the rescue of those in need and to lift those who are weary.

“I will always treasure the quiet interactions we shared together. In his presence, I knew I was speaking to someone intimately familiar with the Lord. Beyond his talks, teachings, and testimony, his service and charity toward his fellow men were unsurpassed. His love for the human family, like his love for God, was unbounded.

“As a community leader, President Monson was peerless, and yet, he never sought the accolades of the world. His sights were set on a more lasting and transcendent goal of lifting the human spirit and condition to a higher plane. He was blessed with a wry sense of humor and a seemingly bottomless well of stories, a gift for language that he used to touch the lives of millions, as well as to lift each person that he met individually.

“Saysha and I express our sincere and deepest condolences to President Monson’s family, as well as to the members of the LDS Church who are mourning the passing of their prophet. We are all better because of President Monson’s service, and it is my hope that we might all, as he did, come to the rescue of those who are in need around us.”

“President Thomas S Monson was a dedicated disciple who spent almost eight decades in the service of his fellow men and his God. He was a strong advocate for Christlike love and the principle of eternal families, and his years as prophet were marked by a massive expansion of the missionary system and the temple network. He led by example, and his messages of love, redemption, and optimism will continue to inspire and shape those he leaves behind, both in and outside the church. My prayers and the prayers of many others are with him and his family today.”

“President Monson was among the greatest men I have ever known. Service was his motto and humility his hallmark. Countless were the lives he touched as a prophet, father, and friend. He emulated Christ in every particular, helping all of us draw closer to God by drawing all of us closer to each other. I’m so grateful for the life of my dear friend and for the example he left for everyone to follow.”