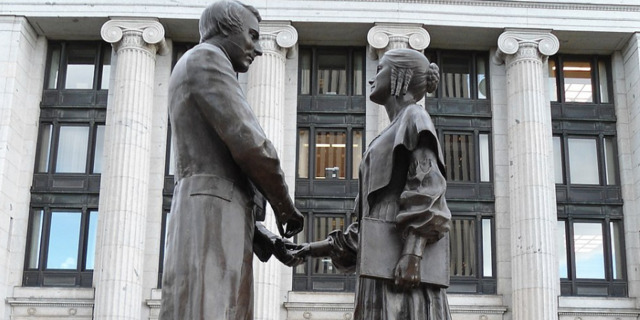 Realizing ‘the privileges and blessings and gifts of the priesthood’: Emma Smith’s role in the early days of Relief Society

On June 9, 1842, Joseph visited the Relief Society and spoke again of their purpose: “The Society is not only to relieve the poor, but to save souls.”1 The practice of service taught the women more than temporal assistance, such as sewing shirts for men working on the temple. It also prepared the women for their own temple endowment. Learning the salvific practice of holiness occurred as women lifted each other and others. Eliza R. Snow wrote poetically of the Nauvoo Relief Society, “It is an Order, fitted and design’d / To meet the wants of body, and of mind— / To seek the wretched, in their long abode— / Supply their wants, and raise their hearts to God.”2

Joseph watched Emma as she cared for the sick, the orphans, and the widows and welcomed them into her home; he recognized her sacred nature. He taught women of the Relief Society, “As you increase in goodness, let your hearts expand—let them be enlarged towards others.” This magnification came only through partnering with Christ. Joseph also knew what the Lord taught Emma in the 1830 revelation, that by keeping His commandments, she could come to where the Lord is, and that this applied to all.3 Joseph said in a meeting on April 28, 1842, “You are now plac’d in a situation where you can act according to those sympathies which God has planted in your bosoms.” He continued, “If you live up to these principles how great and glorious!—if you live up to your privilege, the angels cannot be restrain’d from being your associates.” Then, a step beyond angels, Joseph added, “Females, if they are pure and innocent can come into the presence of God.”4 As the women provided relief, they could assist Christ and find their own salvation.

At one meeting, Emma spoke about the “increasing union of the Society” based on their good works. Later, a Mrs. Chase “prophesied that henceforth, if the sisters are faithful, the gifts of the gospel shall be with us, especially the gift of healing.”5 Even when Emma was not in attendance, women recognized her example. Elizabeth Durfee “bore testimony to the great blessing she received when administered to, after the close of the last meeting, by Prest. E. Smith & Councillors Cleveland and Whitney.” Elizabeth considered this blessing as a significant faith-promoting experience.6 The following year, Dorothy Meacham commented that “our Salvation depended on our Liberality to the poor,” to which counselor Elizabeth Ann responded, “By this shall ye know ye are my disciples.”7 And a week later, another Sister Chase “stood a living witness for Jesus of Nazareth knew he had poured his Spirit upon her. Inasmuch as we visit the sick we shall be blest I mean to do all that I can to relieve their necessities.”8 They learned from Emma’s example and teachings, and they testified of their experiences.

► You may also like: What I didn’t know: An open letter to Emma Smith

Perhaps the most valuable way that Emma and Relief Society women saved souls was through the temple. Joseph visited the women’s meeting on March 31, 1842, and explained “that the Society should move according to the ancient Priesthood.” He said that this “select Society” must be separate from the world, “choice, virtuous and Holy.” He wanted “to make of this Society a kingdom of priests as in Enoch’s day—as in Paul’s day.”9 Joseph hoped the women would realize “the privileges and blessings and gifts of the priesthood.”10 Emma, as Presidentess of the Relief Society and the Elect Lady, was the first to receive her temple endowment in September 1843. She then became the first female officiator of temple rites and passed them on to other women in the Relief Society. Following her precedent, Eliza R. Snow, Zina D. H. Young, and Bathsheba Smith each served concurrently as Relief Society General President and temple matron. The sacred connection between Relief Society and the temple was significant in preparing women to understand priesthood in the temple ordinances.

Part of temple preparation for Nauvoo Relief Society women was worthiness. The Lord taught Emma in her 1830 revelation to “walk in the paths of virtue.”11 She, Joseph, and John Taylor discussed this concept in the Relief Society’s opening meeting. Joseph suggested the importance of “correcting the morals and strengthening the virtues of the female community,” and John spoke of Emma as a “pattern of virtue.”12 Emma enforced stringent requirements to gain membership, similar to contemporary organizations concerned with moral purity.13 She wanted every member to “divest themselves of every jealousy and evil feeling toward each other, if any such existed—that we should bring our conduct into respectability.”14 She taught the women “to eradicate all evil from our own hearts.”15 Emma took her role seriously to determine whether certain women acted appropriately.16 Some were not allowed to join.17 At the last meeting, Emma “exhorted them to cleanse their hearts and ears.”18 Relief Society required repentance, which led to salvation.

From acting as a scribe for the translation of the Book of Mormon to founding the Relief Society, Emma Hale Smith was a key figure in the Restoration. She was also her husband's anchor and the love of his life. But how much do we really know about her role, teachings, and leadership? Drawing upon letters written by Emma to Joseph and to many others, along with minutes from Relief Society meetings and other artifacts, this book sketches a more complete portrait of this elect lady. It allows each of us to become personally acquainted with Emma as we learn more about her essential work as a leader, a wife, and a mother in the early days of the Church. First is available now at Deseret Book stores and at DeseretBook.com.