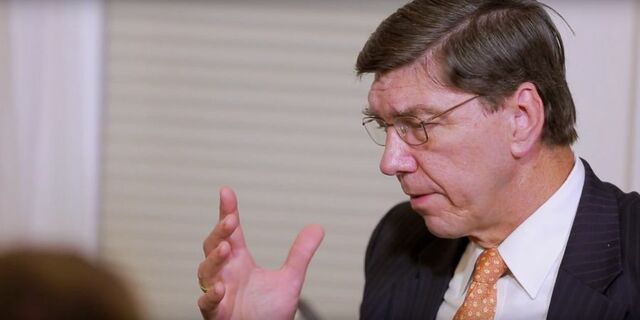 Clayton Christensen never shied away from talking about his faith.

Christensen, who passed away on Thursday, January 23, is remembered for his academic career, business expertise, and innovative mind, but publications like the Wall Street Journal and Quartz are also praising Christensen for putting faith at the center of his messages.

“I deeply believe there is a God. I truly believe that God exists, and if I deeply believe that is true, then it’s not honest for me to hide that belief,” Christensen said in 2016 interview Quartz recently published for the first time. “I try never to impose my belief on others, meaning, I never say, ‘I think I’m right and you’re wrong.’ But if I explain how my belief in God has helped me in my life, I think I can help other people.”

The way he seamlessly integrated his faith into his life is part of his legacy. Among members of The Church of Jesus Christ of Latter-day Saints, Christensen is known for his book The Power of Everyday Missionaries, where he explains that the gospel can be part of daily conversation. It was a pattern he emulated in his own life.

► You may also like: 3 Ways to Create Powerful Missionary Moments Without Making It Feel Forced

“As we have tried to share the gospel with our friends in our home it brings the spirit,” Christensen said in a fireside in 2012. “I’ve almost become addicted to sharing the gospel.”

Many Latter-day Saints have also talked about the legacy of faith Christensen left behind for each of us and shared how he has influenced their lives. Here are some of their tributes.

Clark G. Gilbert, president of BYU-Pathway Worldwide, learned much from his friend and mentor. In a tribute for the Deseret News, President Gilbert shares how Christensen felt he needed to magnify his gifts and talents to honor God.

“I know that Clay very much saw his academic and intellectual work as inseparably connected to his spiritual calling,” President Gilbert wrote. “Even as Clay’s health continued to deteriorate, he would take demanding speaking assignments, many of them in international settings, because he believed his ideas could unlock innovation that would help change the world.”

President Gilbert shared how Christensen would live his faith daily.

“Clay lived his religion in a very authentic way,” President Gilbert wrote. “He was the first to help a family move into his neighborhood, the first to show up for a visit to the hospital. Clay followed spiritual promptings to place a call or send a note. He shared both his financial and attention-based resources with those in need. I remember a time when I didn’t know if I had the capacity to finish my doctoral program and I received a call from Clay and his wife, Christine, together encouraging me to keep going.”

Mitt Romney was in the same ward as Christensen when they both attended Harvard in the 1970s. He shared the impact Christensen has had both in the business world and in the Church.

“Ann and I are deeply saddened by the loss of our dear friend Clay Christensen and offer our condolences to Christine and their children,” Romney said in a statement sent to the Deseret News. “Known as the father of ‘disruptive innovation,’ Clay’s theories and writings influenced generations of entrepreneurs and companies. In addition to a successful career in business and academia, he was a wonderfully kind person and leader in our church community for over 40 years. His contributions to the Church and to the business management field will leave a profound and enduring legacy.”

► You may also like: At BYU, Pres. Thomas Monson Relates How Harvard's Clayton Christensen Got Book of Mormon Testimony

Emily Snyder, who is currently the Magnolia Chief of Staff, had previously worked as the executive assistant and administrative director for the office of Professor Clayton Christensen. She shared a tribute on Instagram about how Christensen influenced her life.

“Since the minute I learned of his passing, I have been noticing the countless thoughts I have that came from Clay: business perspectives about how the world works, Church organizational insights, driving methods, lessons about Jesus Christ, which airlines are best, and a million memories in between. Clay guides my thoughts countless times a day. Clay, and his family, let me into the details of their lives. I watched their examples. I was invited to know their hearts. They shared their people with me. Because they chose to love me, I learned that life is bigger than I once dreamed. I am devastated he is gone and honored to have been molded by this man I cherish. The world knows him as one of the most influential minds. I got to know him as one of my greatest cheerleaders and I will miss him forever,” she wrote.

Tony Finau never met Christensen in person, but the two shared a common bond of being raised in Rose Park, a less-privileged Salt Lake City neighborhood, and having a career which brought them fame.

“I was highly influenced by his mind and his deep faith,” Finau wrote on social media. “If you're looking for inspiration on how to live a great life with purpose and find your happiness, I highly recommend How Will You Measure Your Life by Clayton Christensen. Thanks for your inspiration to another Rose Park kid.”

Clayton Christensen exemplified how to weave gospel topics into daily conversations, and in "The Power of Everyday Missionaries" he explains how to help friends and family members find a more effective approach to member missionary work. His refreshing perspectives are presented in this book, which includes inspiring, unusual stories that demonstrate the effectiveness of the ideas. Available now at Deseret Book stores and DeseretBook.com.