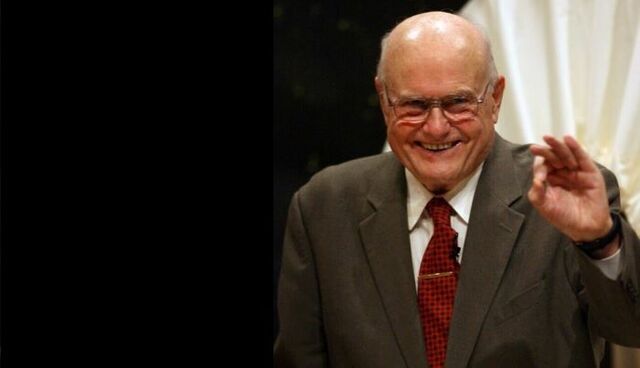 While many Latter-day Saints have heard Elder Dieter F. Uchtdorf of the Quorum of the Twelve Apostles share his experience as a World War II refugee, he is not the only General Authority whose childhood in Germany included fleeing home in the face of war.

At age nine, Elder Busche also fled the home his father had built in the pursuit of safer living conditions for his family. A year later Elder Busche would join the Hitler Youth organization before being drafted as a soldier as the war neared its end. He was captured and taken to an American prison camp when the war ended, but he was later allowed to return home.

Elder Busche attended university and married his wife, Jutta Baum Busche prior to being introduced to the missionaries. According to Church News, the Busches were baptized on Jan. 19, 1958, in a public swimming pool in Dortmund.

Church News stated, “The gospel changed the life of Elder Busche and his family drastically. It called him away from his home and culture, but he regularly expressed his gratitude for the gospel in his life.”

A popular BYU devotional Elder Busche gave in 1996 demonstrates not only his devotion, but his ability to help other’s feel the spirit as well. The talk is called "Unleashing the Dormant Spirit." A six-minute video featuring a portion of his talk was shared on YouTube in 2008 and has nearly 600k views.

“The pain of sacrifice lasts only one moment. It is the fear of the pain of sacrifice that makes you hesitate to do it. Be grateful for every opportunity to serve. It helps you more than those you serve,” said Elder Busche in the devotional. “Finally, when you are compelled to give up something or when things that are dear to you are withdrawn from you, know that this is your lesson to be learned right now. But also know that while you are learning this lesson, God wants to give you something better.”

Watch the video created from a portion his 1996 BYU devotional below, or read the full talk here.