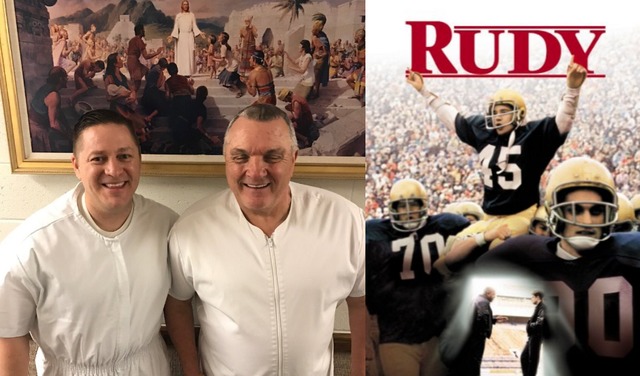 Most people know the story of Daniel Eugene "Rudy" Ruettiger from the classic Hollywood movie Rudy.

While the movie captures Ruettiger's tenacious battle to become a football player for Notre Dame's Fighting Irish, it shows little of his life after college, including his spiritual journey of becoming a member of The Church of Jesus Christ of Latter-day Saints.

When Ruettiger first became exposed to the LDS Church, he was doing something quite ordinary: preparing to watch a Notre Dame football game.

Several years ago, BYU Coach Bronco Mendenhall invited Ruettiger, now in his 60s, to attend a fireside the night before Ruettiger's Fighting Irish took on the BYU Cougars. Despite growing up attending Catholic schools and rooting for a Catholic college team, Ruettiger was impressed by the testimony of the football players from this Mormon school and he began asking questions, wanting to know more. "The Spirit touched his heart and he knew where he needed to be," a Facebook post by United Latter-day Saints shares.

With this new chapter in Ruettiger's life, the inspiring story of Rudy continues to show how one man went against all the odds to obtain his dreams.

As a young boy, Ruettiger battled dyslexia, something he didn't discover until attending Holy Cross College. It took four attempts before Ruettiger finally got accepted into Notre Dame, where he hoped to play on the football team.

But at 5'6" and 165 pounds, the possibility of Ruettiger becoming a Fighting Irish football player was minuscule. That never deterred Ruettiger, who worked many long, grueling hours to make it onto the Notre Dame scout team.

During his last chance to play at a home game, Ruettiger's coach, Dan Devine, had him dress and play in one of the last plays of the game as a defensive end. With just 27 seconds left on the clock, Ruettiger sacked Georgia Tech's quarterback in one of the most memorable underdog stories in football history. After the game, Ruettiger's teammates carried him off the field, making him one of the only players in Notre Dame history to be carried off the football field.

In honor of Ruettiger, the College Football Rudy Award is now awarded to football players who show character, courage, contribution, and commitment on the field.