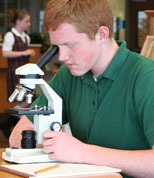 Elder Dallin H. Oaks of the Quorum of Twelve Apostles of The Church of Jesus Christ of Latter-day Saints was the commencement speaker for American Heritage School’s first graduating twelfth-grade class on June 1.

A private, non-profit school with the motto of "Educating Hearts and Minds for Latter-day Families," American Heritage began in 1970 with 30 students in grades K-6 after the BY High and the Brigham Young Training School closed. American Heritage has since grown to become an accredited school with over 600 students in grades K-12, an international student program, a distance education program and a community music program.

Elder Oaks learned of American Heritage School's connection to his alma mater, BY High, after his daughter, nationally-acclaimed violinist Jenny Oaks Baker, performed as a guest soloist at an AHS-sponsored event two years ago. Elder Oaks graduated from BY High in 1950.

“The graduation of this first senior class is the result of tremendous hard work and sacrifice not only by the students, but by parents, teachers and numerous volunteers,” said Grant Beckwith, Head of School.

American Heritage announced a significant expansion with the planned acquisition of additional land, and the unveiling of a campus master plan to include additional buildings.

Many of the 23 seniors have received admission and scholarships to various colleges including Brigham Young University (Provo and Idaho), Purdue University, Southern Virginia University, University of California at Santa Barbara, Edmonds College, University of Utah and LDS Business College.

For more information on American Heritage School go to www.american-heritage.org.