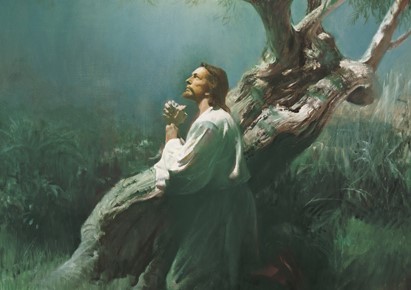 Conference Talk: For more information on this topic read "A Broken Heart and a Contrite Spirit," by Bruce D.Porter (general conference, October 2007).

Thought:"As we make the sacrifice to Him of all that we have and all that we are, the Lord will fill our hearts with peace" (Bruce D. Porter, "A Broken Heart and a Contrite Spirit," general conference, October 2007).

Scripture: "Verily I say unto you, all among them who know their hearts are honest, and are broken, and their spirits contrite, and are willing to observe their covenants by sacrifice--yea, every sacrifice which I, the Lord, shall command--they are accepted of me" (Doctrine and Covenants 97:8).

Display the glass of ice water and ask the class if the water appears desirable. Most will express a fairly positive attitude toward it. Then ask them to imagine that they have been working in the garden on a hot summer day. There is no shade. They are bent over pulling weeds all afternoon. They are sweating and their mouth is dry from the dust.

Ask them how desirable the glass of water will appear after this hard day of work. State that we experience a similar feeling in life when we sacrifice time, effort, or means for any good thing. This holy act of sacrifice leads us to a greater appreciation of what we do have. It helps us focus on our many blessings that we take for granted (Beth Lefgren and Jennifer Jackson, More Power Tools for Teaching, [Salt Lake City: Bookcraft, 1991], p. 64.).

Story: Elder W. Craig Zwick served as president of the Chile Santiago South Mission from 1989 to 1992. He presided over a mission that saw more than 5,000 convert baptisms per year. The growth was exciting as well as challenging for President Zwick and his wife, Jan. But one of the most satisfying experiences of their mission was to see young Chileans come into the mission field and not only experience success but also develop the leadership skills they needed to serve in their home wards and stakes. Some of the Chilean missionaries had to sell musical instruments or other possessions to finance their missions. Many worked multiple jobs to raise sufficient funds for their missions, and many served in-spite of parents who would not or could not support them. Most came from humble backgrounds.

In many cases, the missionaries who came from LDS families had never been sealed in the temple. But at the end of their missions, the families would often travel, at great sacrifice, to Santiago, where they could pick up their missionary and receive their endowments and sealings in the Santiago Chile Temple. These families would then return home, and the young returned missionaries would use the faith and understanding they had gained to strengthen the members in their wards and stakes.(Dean and Tom Hughes, We'll Bring the World His Truth: Missionary Adventures from Around the World, [Salt Lake City: Deseret Book, 1995].)