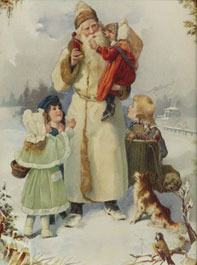 Santa's of the World

Come with us as we travel the world finding the traditions of Saint Nick...

From England we have acquired several customs. The first is the use of Christmas trees. This was made popular during the rein of Queen Victoria and Prince Albert. Prince Albert came from the country of Germany and missed his native practice of bringing in trees to place on the tables in the house, therefore one Christmas the royal couple brought a tree inside the Palace and decorated it with apples and other pretty items.
The second custom is what is known as Boxing Day. It is celebrated the first weekday after Christmas. What this means is that small wrapped boxes with food and sweets, or small gifts, or coins are given to anyone who comes calling that day.
Santa is known as Father Christmas, wearing long red robes and had sprigs of holly in his hair. Instead of mailing out their christmas list, children throw it into the fireplace and Father Christmas reads the smoke. England is also where the tradition of hanging stockings by the chimney began, due to the fact that Father Christmas once accidentally dropped some gold coins on his way down the chimney which got caught in a drying stocking. Another interesting thing is that instead of opening up their gifts as soon as they wake up, English children wait until the afternoon.