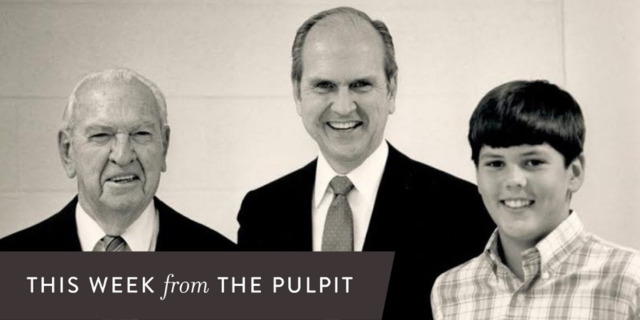 Editor’s note: “This week from the pulpit” highlights recent messages by Church leaders.

In recognition of Father’s Day, several Church leaders shared touching tributes to fathers on social media. President Russell M. Nelson said that even though fathers aren’t perfect, they have a lasting impact on their families. Relief Society General President Jean B. Bingham shared that one of the best gifts a father can give is the knowledge that he has a firm belief in God.

Additionally, Elder LeGrand R. Curtis Jr., Church historian and recorder, spoke in a livestreamed Church History Museum event about some of the sections of the Doctrine and Covenants that have impacted his life.

Find a summary of Elder Curtis’s remarks below as well as social posts from Church leaders.

Which sections of the Doctrine and Covenants have impacted your life? Church historian and recorder shares several of his

One of Elder LeGrand R. Curtis Jr.’s many favorite lines in scripture is in Doctrine and Covenants 76.

The Prophet Joseph Smith and his family were living at the home of John and Elsa Johnson. Joseph was working on translation of the Bible when he and Sidney Rigdon had a vision. They would describe what they saw and confirm it with the other, including seeing Jesus Christ on the right hand of God and the celestial, terrestrial and telestial kingdoms.

The section also includes instructions on what they were supposed to write and share, along with warnings to not write about other things that they saw. Those instructions continued with verse 116: “Neither is man capable to make them known, for they are only to be seen and understood by the power of the Holy Spirit, which God bestows on those who love him, and purify themselves before him.”

“I just love that description of the Holy Spirit and how God bestowed upon those who love and purify themselves before him,” said Elder Curtis, the Church historian and recorder, executive director of the Church History Department, and a General Authority Seventy, during the Church History Museum’s Evenings from the Museum series on Thursday, June 17.

During the presentation that was livestreamed on Facebook and YouTube, Elder Curtis highlighted several sections that have had an impact on him, along with the history of publishing the Doctrine and Covenants and study materials from the Church History Department.