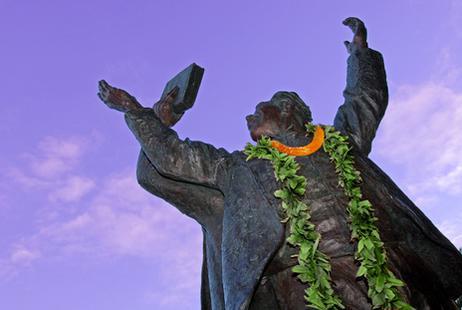 Seeing Christ "Face to Face:" The Miraculous Work of an Apostle in Hawaii

What a beautiful illustration of the close relationship the apostles develop with our Heavenly Father and He who they are a special witness of, even Jesus Christ. After a powerful, divine manifestation George Q. Cannon received in Hawaii--one so sacred, he rarely spoke of it--Cannon recorded that God “revealed himself to me as he had never done before. … Many things were revealed to me during those days, when he was the only friend we had to lean upon. A friendship was thus established between our Father and myself, which I trust will never be broken or diminished. … He condescended to commune with me, for I heard his voice more than once as one man speaks with another.”

In September 1850, Charles C. Rich of the Quorum of the Twelve Apostles of The Church of Jesus Christ of Latter-day Saints called 10 young elders to leave Northern California and commence missionary work in the Sandwich or Hawaiian Islands. After a rough month at sea, they reached Honolulu in December; within days, Elder George Q. Cannon and two others were assigned to the island of Maui.

Mid-19th-century Hawaii bore little resemblance to today’s modern American state. The Maui elders lived first in a grass shack in Lahaina. Later, a generous woman named Nalimanui offered to move in with her daughter to allow the missionaries to use her home.