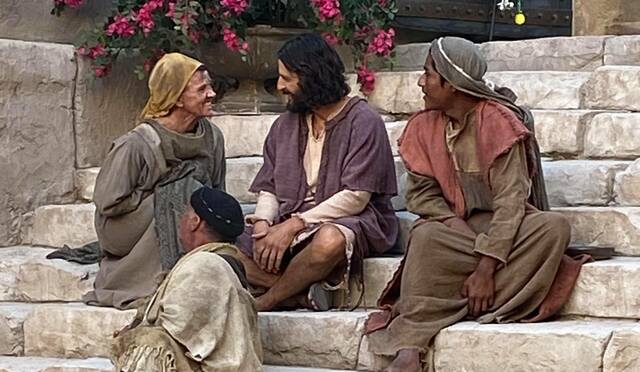 Seeking healing by the waters of Bethesda: Experiences on the set of ‘The Chosen’

There is a giant set of doors on the Church’s Motion Picture Set in Goshen, Utah, and one Friday last month, those doors were the only thing separating me from the action. I knew that just behind those doors, a crew was filming scenes from the pool of Bethesda, and I longed to get a glimpse of what it would’ve been like in Jerusalem. I didn’t know if Jonathan Roumie, the actor portraying Jesus, was behind those doors or not, but I just wanted to see him. I know he’s not really Jesus, but I also knew this might be the closest I would ever get in this life to witnessing Christ’s miracles, and all that was obstructing my view of him was that big set of doors. I think I felt if I could only see him, even if it was just an actor playing Him, it would do something for my heart.

I was being accompanied on a tour around the set with people who, like me, were hoping for their chance to see “Jesus.” They had traveled from Los Angeles and Texas to the middle of nowhere in one of Utah’s deserts because they have fallen in love with The Chosen, the first multi-season show about the life of Christ. Most of them had donated large sums of money to the project because the show has impacted their lives and their perception of Christ so deeply. Each one came from a different background—some were members of The Church of Jesus Christ of Latter-day Saints and others were not—but we were united by a mutual love for the Savior. I wanted to know more about them. What drew them here? What were they seeking?

In the days and weeks since visiting the set, I have thought about why people came to the Pool of Bethesda—the scene that was being filmed while I was there. They came longing to be healed. We read in John 5, that there was “a great multitude of impotent folk, of blind, halt, withered.” I imagine that in addition to those plagued by physical ailments, there were also those who sought emotional healing. Tradition held that the first person immersed in the water after the waters moved, or were troubled by an angel, would be healed. We read that one Sabbath day, the Savior sought out a man who lay by the pool, having suffered from an infirmity for 38 years. When Christ asked the man if he would be made whole, the man replied, “Sir, I have no man, when the water is troubled, to put me into the pool: but while I am coming, another steppeth down before me.” Jesus healed him, speaking words that must have been so beautiful to the man’s ears, “Rise, take up thy bed, and walk.” It was the very thing the man was incapable of doing just moments earlier. But after encountering the Savior, he had been healed.

► You may also like: ‘He was born to play this role’: Director of ‘The Chosen’ discusses the process of casting the role of the Savior

As President Thomas S. Monson said, “Let us remember that it was not the waters of Bethesda’s pool which healed the impotent man. Rather, his blessing came through the touch of the Master’s hand.”

Once all of the cast, crew, and extras cleared off the set, we did finally get to walk through the doors to the Pool of Bethesda on the Church’s Motion Picture Set. But even more impactful was the realization that while the group of us were not looking for the healing that those of Christ’s time came to the pool for, we had come seeking Living Water by coming to know and feel closer to the Savior through something as small as a television show. I believe it is a desire to be healed by the touch of the Master’s hand that draws people to The Chosen by the millions, and that it is what drew all of us to a set in the middle of nowhere last month. 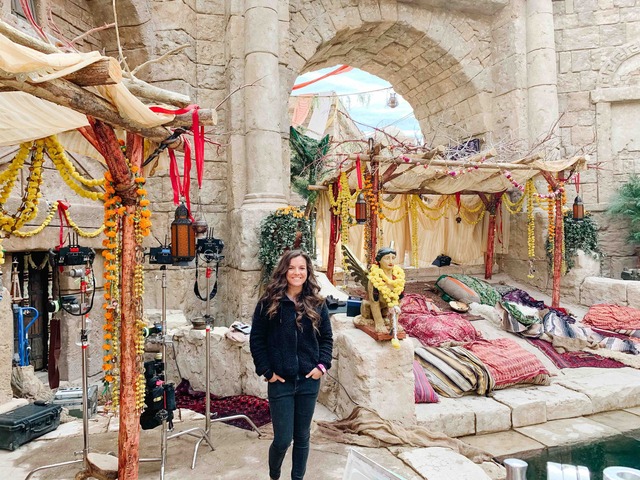 As I drove home that day, I was talking to my mom on the phone about my experience, and she told me about a post she had seen on Facebook about another woman’s experience on the set by Bethesda’s waters. Unlike me, this woman, Julene Judd, was an extra, meaning that she got to be in on the action—she got to see past the big doors. While I was only able to view an empty set, she watched it come to life.

Towards the end of the day, I got to join some other extras as a cripple, and sit on the steps of the pool of Bethesda. I held very still as I watched the actors, for the next several hours, work on this pivotal scene. I marveled at the level of energy and effort it must have taken to go to that strenuous emotional place over and over again. I also noticed that the directors usually called the actors by the name of the character they were playing. Except for Jesus. I could see how that felt disrespectful to be calling His name loudly, over and over again, telling Him what to do. Everyone called the actor playing Jesus by his first name, Jonathan.

I took with me in my heart and my pocket, the names of faces of those I love who long and pray for healing in one way or another. They were with me in spirit on the steps, and I prayed for them all day. . . . Towards the end of the night, they started shooting on the stairs on my side of the pool. I kept my gaze down, trying to act like an invalid, even though my insides were going crazy because Jesus was right next to me!!! At one point, he leaned over with a grunt, because one of those pokey weeds, a goat head, was stuck in his sandal. And those things hurt! His foot was right next to me and I forgot myself and the rules and reached over with my shawl to try and wipe it away for him. Jonathan looked at me and put his hand on my shoulder and smiled and thanked me. Then they moved on. A few minutes later as we were waiting for the crew to move a big camera, I felt someone sit down next to me. It was him.

It's hard to describe the next few minutes. He asked me my name and said, ‘I’m Jonathan.’ And I said I KNOW! And I started to cry. He asked the others their names and where they were from and how they got here. When he turned to me, I told him I was supposed to be emptying the set garbage cans and that I had just wanted to be close to Jesus. I asked him about his family and told him how proud they must surely be of him. Then the director hollered and Jonathan was gone.

I will always remember his eyes and his smile. The Spirit immediately taught me that this small, simple interaction is just what the Savior would have done if he were here . . . taking time to see the invisible, the marginalized, the extra and unimportant, and help them feel loved.

The Hebrew meaning of the word Bethesda means ‘house of mercy, house of grace.’ An actor named Jonathan ministered to me today. He didn’t have to, but he did, and I felt God’s love for me. It was beautiful, merciful grace.

As my mom read Julene’s experience to me, I couldn’t help but feel a tinge of jealousy. I wanted to feel what she felt. For me, the edge of the waters of Bethesda were just a man-made pool of water on the empty set of a television show. But that very same replicated pool of water was transformed when someone acted, not just on camera but when the cameras weren’t rolling, as Christ would have.

Despite his Christlike nature, as Judd and others have described it while filming The Chosen, Roumie has spoken of his initial hesitancy to embrace the role of Christ in the series.

“During one scene, I had a moment where I felt completely overwhelmed, and whether it was my own fears or the evil one working on my mind feeding it with all sorts of nonsense, I had to stop for a moment and talk to Dallas (the show’s director) because I wasn’t feeling right about it,” Roumie recalled in May 2020. “I said, ‘This is really difficult for me.’ And he asked me why, and I said, ‘Because I don’t feel worthy to be saying these words, filling these shoes, preaching to these people . . .’ And he said something to the effect of, ‘None of us are worthy [to be doing this] . . . you’re not worthy, and neither am I . . . that’s the story of this project,’ but that God wouldn’t let us fail. So his reassurance reminded me what we were there to do, specifically us . . . and that moment stuck.”

From the first season to the filming of the second when Roumie found Judd on the edge of the waters of Bethesda, something changed in him—so much so that he was able to minister as Jesus would even when the camera stopped filming. Somewhere between that initial overwhelming feeling and his meeting with Julene Judd, Roumie seems to have taken Jenkins’s words to heart. I think there is something to be learned in that for all of us.

So, if you, like me, feel that something may be obstructing your view of Christ, like the doors were for me on the set, if you long in your heart to just catch a glimpse of Him like Judd, or know that by the power of His voice you could find healing like the man in the scriptures, may I remind you that He is all around us and within us. As Roumie shows us, despite our unworthiness, we have been asked and have the ability to be His hands and it is by being His hands that we truly find healing.

The Chosen is the first-ever-multi-season TV show about the life of Jesus. Created outside of the Hollywood system, The Chosen allows us to see Him through the eyes of those who knew him. No matter where you are at in your journey with Jesus Christ, this TV show is for you. The first season is available for free through The Chosen app on iOS and Android. You can also purchase the season on DVD at DeseretBook.com.

Television BibleTelevision,Bible,
Comments and feedback can be sent to feedback@ldsliving.com