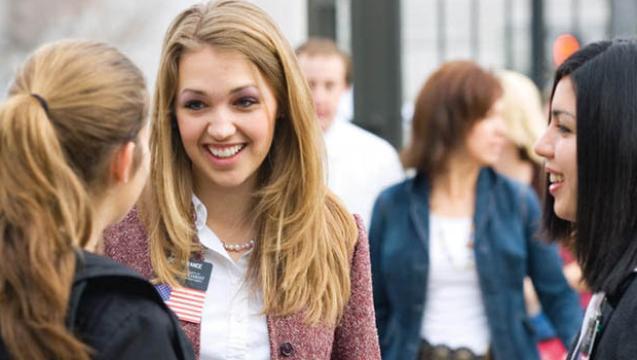 Sister missionaries get a new wardrobe

For years, the dress standard for sisters missionaries has been a consistent guideline and entirely unchanging. In recent months however, the Church has implemented new changes to the approved apparel.

Encouraging brighter colors, patterns and even accessories, the Church hopes to make sister missionaries’ appearance more inviting to investigators.  With completely new photos, the changed apparel guidelines have proliferated as they have been sent out to sisters recently receiving their mission calls, and current missionaries have been notified by their mission presidents.

In addition to the unchanged guidelines of retaining modesty by ensuring clothes are neither too tight or too loose, sheer or sloppy, the new standard is meant to enhance the perpetual tradition of presenting oneself as dignified, well-groomed and clean in appearance.

“The Church provides dress and grooming standards for Elders and Sisters alike, which are current with acceptable styles yet maintain an appearance of dignity, professionalism and modesty,” said Scott Trotter, spokesperson for The Church of Jesus Christ of Latter-day Saints.

In conforming to current acceptable style, the updated guidelines encourage sisters to wear brighter colors and patterns, simple accessories and dub nylons as optional. Skirt length has also been modernized with the rule that they can rise above mid-calf, but are still required to cover the knees when sitting or standing.

Although there are revisions, sisters are still required to maintain their appearance of modesty, wearing conservative outfits that consist of professional suits, skirts, blouses, jackets, sweaters and dresses.

Blackburn is among the ranks of newly called sisters who are excited to shop for their missionary wardrobe. She believes that if they take the changes to heart and add bright colors, the new standard will cause sisters to dress in a way that’s more approachable and relatable to investigators.

In addition to the sisters’ more welcoming appearance, the revisions will also dispel the common notion to call sisters “drab,” and perhaps cause a deviation from attention on what the sisters are wearing, to what they are saying.

“When my uncle was a mission president, he’d hear concerned women who were worried they’d have to dress like the sister missionaries if they joined the Church,” Blackburn said.

Over the next years when sisters receive their calls, they may be excited to discover the updated options for apparel during their 18 months of preaching the gospel—though it's just one small reason to celebrate the joy of serving.