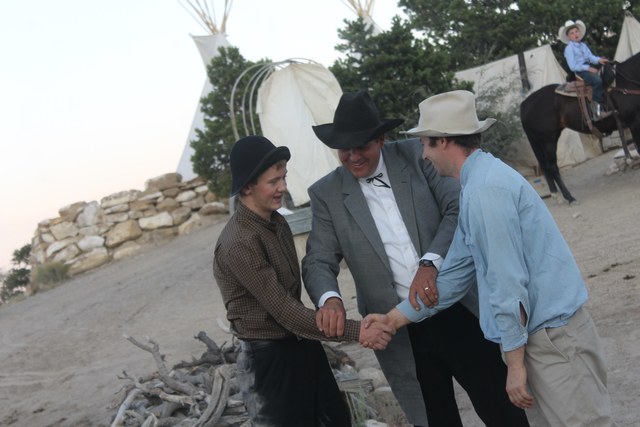 Sponsored: Gain Greater Appreciation for the Pioneers by Attending the Castle Valley Pageant

Help your family remember the pioneers by attending the Castle Valley pageant! Discover Castle Valley, Utah, through an elaborate outdoor historical drama that portrays the settling of the frontier. And don't miss the Pioneer Village, where guests learn about the crafts necessary for a pioneer settlement to survive, such as blacksmithing, farming with horse-drawn implements, weaving, and spinning.

The pioneer village at the pageant site begins each night at 6:30 p.m. In the pioneer village, visitors can experience prairie diamond rings, homemade bread and ice cream, cow milking, quilting, dutch oven cooking, horseshoeing, wagon rides, and many other activities.

The pageant founder, Montell Seely, passed away in August of 2008 in a handcart/vehicle accident in Fairview Canyon. Seely was the driving force in beginning the Castle Valley Pageant. He had the idea for a pageant in the back of his mind since he was a missionary in the Central Atlantic States, assigned to labor on the Cherokee Indian Reservation in North Carolina. The Cherokee Indians produced a pageant to tell their story of how the army rounded up the Cherokee Indians and marched them all the way to Oklahoma. This tale of their journey became known as the "Trail of Tears."

Seely, as a young missionary, had the opportunity to see the pageant "Unto these Hills," and it made an impression on him. He had long thought Emery County needed a pageant and wished someone would put one together.

The Castle Valley Pageant has now been an annual tradition in Emery County dating back to 1978. Montell was the man with a vision when it came to the pageant. Though he never considered himself a writer, he wrote the story to depict the early settlers to Emery County who came from the Sanpete Valley. The settlers were instructed to settle the Castle Valley byPresident  Brigham Young. It was the last colonization directive he gave before passing away. Seely had a passion for bringing the stories of the pioneers to life. He wanted to make their stories very real for the generations of today and those people yet to come.

The pageant is August 2nd-4th and August 7th-11th at the pageant site high above the towns of Emery County. Admission is free and no ticket is required. Click here for more information.