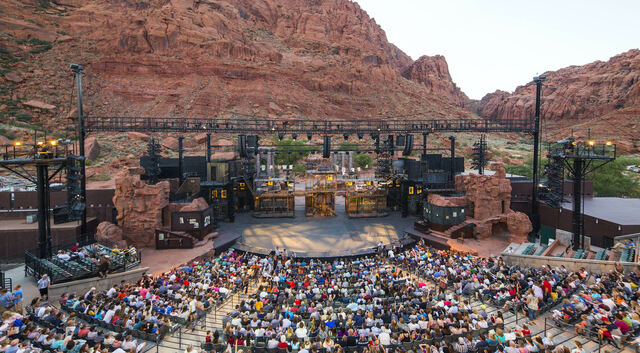 After more than a year of being nearly frozen in time, the actors have arrived at the Tuacahn Amphitheatre for the 2021 Broadway season and, in the words of Disney’s Beauty and the Beast, they are thrilled to be “Human Again.”

Stepping onto the Tuacahn Center for the Arts campus after more than a year of uncertainty, Mara Newberry Greer had to keep pinching herself to make sure it was really happening.

It wasn’t until the first cast meeting that she finally breathed in the reality of it all.

“I got emotional,” Greer said. “It was my first time hearing live singing for almost a year.”

After choreographing and even co-directing several past Tuacahn shows (Shrek 2017, Matilda 2018, The Sound of Music 2019) this is Greer’s first chance to direct a Tuacahn show on her own and she can’t wait to sink her teeth into all the talent, passion and hope emanating from this year’s production of Annie.

“I can’t tell you how many times this past year while working with the show designers that I’ve drawn strength from the message in the song ‘Tomorrow’,” Greer said. “The thought that ‘the sun will come out tomorrow’ has been on all of our minds.”

And it seems that the sun is finally peeking out from behind the dark COVID clouds.

After months of tireless efforts to create an environment safe enough to proceed with this year’s theater season, Shari Jordan, assistant artistic producer, and casting coordinator, said she literally cried tears of joy when she received word that, “Our safety protocols have been approved by Actors’ Equity to begin our season.”

The news came as both a blessing and a responsibility.

“Tuacahn is the first major regional theater to resume with a cast of this size,” Greer said. “It’s really paving the way for all the other theaters to open.”

Even though that agreement means a lengthy list of safety measures that align with local government and health regulations, including masks, distancing and plexiglass shields anytime they rehearse indoors; masks and distancing during outdoor rehearsals until the entire cast is vaccinated and COVID-19 tests three times each week, the fact that they could finally perform again was music to the ears of the cast and crew.

“Everybody is so excited to be here,” said Todd DuBail, who plays Gaston in Disney’s Beauty and the Beast and Rooster in Annie. “I’m so excited to see something on stage and to feel that energy.”

Mallory King (Babette in Beauty and the Beast, Lilly in Annie) agreed that the enthusiasm is almost palpable. She also said everyone has had their own emotional triggers to work through as they consider the last year and what it means to be back to work in the theater industry.

“There have been teary moments for some during music rehearsal,” King said. “For me, I went into a costume fitting and it started to feel real and I just started to cry. 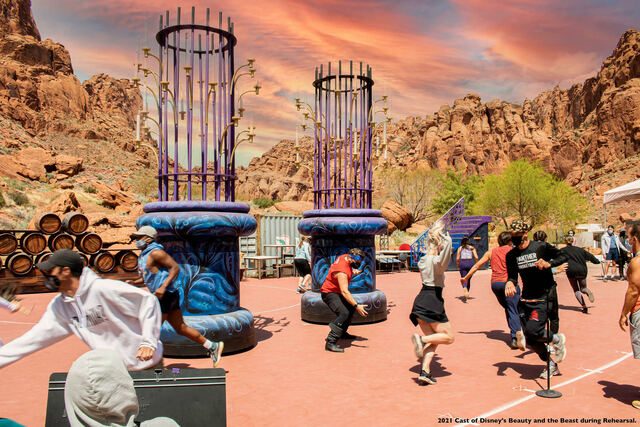 The additional precautions, such as wearing masks during rehearsals can, at times, make it difficult or awkward to emote as an actor, or to respond to another actors’ emotions. But this year, it’s just another of the hurdles the talented cast and crew are ready to jump over.

DuBail equated it to the era of silent movies when emotions had to be communicated with the entire body, something he says stage actors are very used to doing.

It’s all a matter of thinking outside the box — or in some cases inside a three-sided plexiglass box — to make rehearsals safe and effective.

“It’s an interesting process,” King said. “There is a lot more time rehearsing out in the sun, but everyone is so excited to be working, you won’t hear any of us complain.”

Both King and DuBail said it is a small price to pay for the gratitude they feel. Plus, it makes opening night an even more anticipated event when they will act together on stage for the first time without masks.

At the end of the day, all the hoops and hurdles, restrictions, and red tape are nothing compared to the reason behind it all — sharing amazing stories in an awe-inspiring place.

“The great thing about Disney musicals is that they’re family-friendly,” said Michael Heitzman, director for Beauty and the Beast. “With Beauty and the Beast you have this really great message. It’s amazing for kids, but it’s not just a kids’ show. There are so many deeper levels where adults can connect with it.”

Laughing, he added, “It’s not all just dancing forks and spoons.”

But don’t worry — there will be plenty of that too.

Built to incorporate a turntable stage and a variety of video projections, the main desire of the scenic design team was to create a visual feast for the audience that includes all the spectacle and pizazz of a Broadway-quality production and plenty of Tuacahn’s natural beauty.

“The design fits so beautifully in the canyon,” Heitzman said. “It’s really cinematic in many ways.”

Meanwhile, in Depression-era New York City, a spunky orphan and her friends are making the best of a “Hard Knock Life” and finding joy in the little things.

“It’s so fun to see things through a child’s perspective,” Greer said, speaking not only of the show itself, but the enthusiasm each of the child actors bring to the project.

Citing the scene where the orphans listen to the radio and then decide to put on their own version of “You’re Never Fully Dressed Without A Smile” as one example of the kind of real-life optimism in Annie, Greer said she is certain “the audience is going to feel that joy.”

And it serves as the perfect contrast to the person everyone loves to hate: Miss Hannigan.

“She is fantastic!” Greer said. “There are so many iconic characters that are so fun.”

Tuacahn’s 25th season kicks off May 7 and runs through Oct. 23. Tickets to Disney’s Beauty and the Beast and Annie, as well as The Count of Monte Cristo, School of Rock, Million Dollar Quartet, and A Christmas Story can be purchased online at www.tuacahn.org or by calling 800-746-9882.