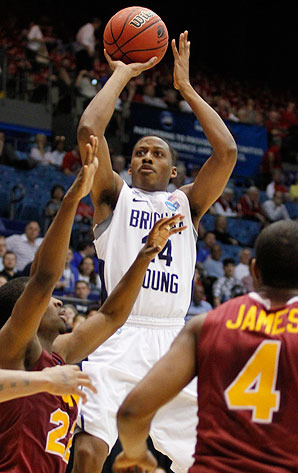 Sports Illustrated: Changes in Mormon church could have impact on BYU, recruiting

Damarcus Harrison found himself in the middle of a nightmare in August.

Harrison is a member of the Church of Jesus Christ of Latter-day Saints -- he's a Mormon -- and his plan, like so many Mormon students, was to enroll in college for a year before spending two years on a mission. But unfortunately for Harrison, a former top 100 wing who averaged 3.2 points in nine minutes per game for BYU last season, the bishop of his church back in South Carolina wouldn't issue the paperwork for his mission as originally planned.

The decision put Harrison's season in jeopardy. BYU head coach Dave Rose, expecting Harrison to be away for two years, had already given his scholarship to someone else. That's not a knock on Rose; it's a reality he has to deal with. "It's a real challenge for us to plan for scholarships," Rose said. "Right now, we actually have a scholarship committed to a player who is verbally committed to us who is here through the 2019-20 season. The spreadsheet is quite complicated."