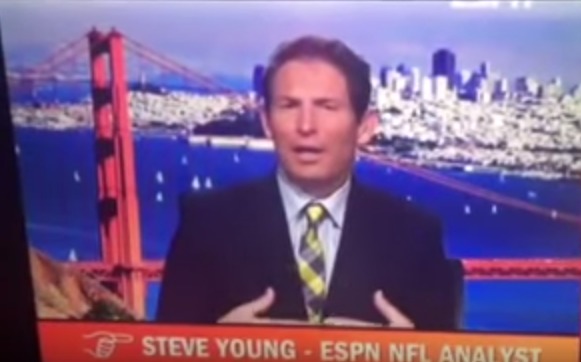 Viewers of Wednesday's "Pardon the Interruption," a popular sports debate show on ESPN, are used to hearing quotes from legendary leaders. Coaches like Knute Rockne, John Wooden, and Vince Lombardi all led their teams to greatness, and their platitudes of wisdom are often echoed to the athletes of today.

But when the hosts brought in Steve Young, an NFL Hall-of-Famer and Latter-day Saint, to address the recent struggles of the Detroit Lions? Well, this happened:

Young, speaking of a team's need for an independent locker room, said it can be harmful when a coach is too involved. "You don't want to be the one who's trying to over-control what's going on in there," he said. "The greatest locker rooms in football, the ones that go to championships, live the famous quote, 'You teach them correct principles and let them govern themselves.'"

The "famous quote" that Young used came from the Prophet Joseph Smith, who was once asked how he was able to effectively govern so many people.

Young became a household name as BYU's starting quarterback in the early 1980s. He played 13 seasons for the San Francisco 49ers, winning three Super Bowls and two MVP awards. He broke several NFL records and was inducted into the league's Hall of Fame in 2005.