When an elementary school principal received a school excuse note signed by Pro Football Hall of Famer Steve Young, her reaction was probably something the 9-year-old student would never forget.

Nine-year-old Cade Draper thought his father was taking him to the dentist on Tuesday afternoon. Instead, Cade went to go meet a football legend that even helped excuse Cade for missing school. 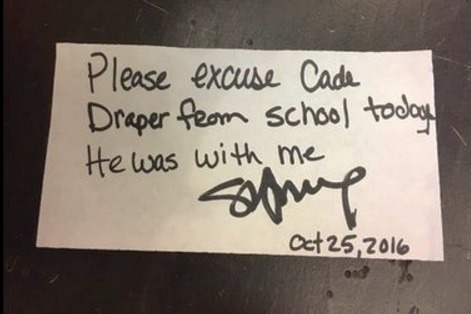 Hall of Fame quarterback Steve Young was going to be in downtown Salt Lake City at Deseret Book on Tuesday, signing copies of his new book, QB: My Life Beyond the Spiral. Cade’s dad, Jake Draper, found out about the signing and checked Cade out of school, originally telling his son he was going to the dentist.

“Aw, really?” Cade said, describing his reaction to when his father told him they were going to the dentist.