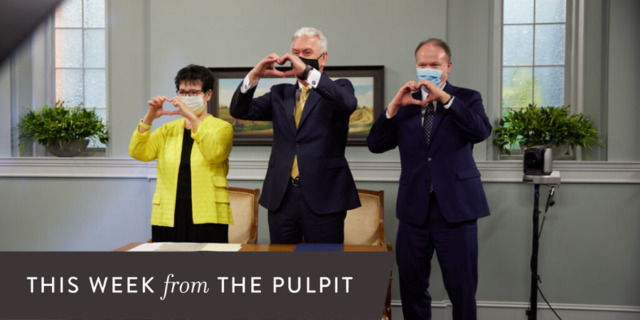 Sweetest moments from the Friend to Friend, an apostle speaks to young adults in French, and more ministering to the youth this week

This week, many Church leaders shared messages specifically targeted toward the youth and young adults of the Church—but their messages are hopeful, timely reminders for us all. Here is a look at the special events and devotionals that were held for the young people of the Church in the past seven days.

Highlights from the First Friend to Friend Event

On February 20, 2021, the Church released the first ever Friend to Friend event for children. The broadcast featured a colorful rotating set and was hosted by two primary children. During the program, children colored, played with rocks, sang songs, and listened to messages by President Russell M. Nelson, Elder Ulisses Soares, and members of the Primary General Presidency.

President Nelson emphasized in his message that even children can do great things for Heavenly Father. In a Facebook post following the event, he said of children’s contribution, “They can help someone in need, learn the teachings of Jesus Christ and abide by them, and prepare now to go to the temple and be baptized for their ancestors.”

President Nelson also encouraged viewers to remember that they are children of God.

“If you never forget that one pure truth, you can face any problem with faith and courage,” he said.

Ulisses’s mother had given him money to go and buy fruit at the store. On his way home, Ulisses realized that the woman behind the counter had given him too much change. At first, Ulisses considered keeping the extra money to spend on something he wanted. But then he remembered his baptismal covenants.

“I knew that to keep my baptismal covenants, I needed to be honest. When I had this thought, I felt the Holy Ghost,” Elder Soares said.

So, he went back to the store and returned the extra money.

“Choosing the right during this moment gave me the strength to make many, many other correct choices and keep my promises to my Heavenly Father,” Elder Soares shared with the children.

Watch the animated video of Elder Soares telling this story below.

Sister Joy D. Jones, President of the Primary General Presidency, wrote about a special moment they had while filming the broadcast with 7-year-old host Brianna Villsnil.

“At the beginning of the studio filming, Brianna was asked to give the opening prayer. She asked Heavenly Father for perfection in their delivery and in the work of the crew. She prayed that the children of the world would feel God’s love for them. She prayed that the event would touch the hearts of children and help them know Jesus Christ better. The Spirit in the room could be felt by all. It was a pure child’s prayer with the power and conviction of a spiritual giant,” President Jones wrote. “I love the children of this Church. They are capable. They are resilient. They are remarkable.”

Watch the full broadcast below.

► You may also like: 3 lessons one young mother was reminded of while watching the Friend to Friend event

Elder and Sister Uchtdorf Speak with Missionaries in Worldwide Devotional

In a devotional posted Thursday, February 25, on missionaries’ online portal, Elder Dieter F. Uchtdorf praised missionaries who have learned to use technology and social media in new and effective ways during the pandemic. He encouraged them to be heartfelt and authentic as they create social media posts.

“Use your heart when creating them, think of the people they are meant for, and seek the help of the Spirit. If you aim for these goals, I promise you the Spirit will help you to touch the hearts and the minds of the people,” Elder Uchtdorf said.

The devotional also featured a question-and-answer session. One sister missionary who recently lost her mother asked how she could rise above her challenge and still find purpose in her heart. Sister Harriet Uchtdorf answered by drawing upon her own experience of losing her father. She shared that missionaries had been influential in bringing light into her life after his passing.

“It was as if angels had been sent to us from heaven. The light they shared with us was the light of their testimonies, their love for the Lord, and for us,” she said. “Your daily service will bless many lives around you, and I promise it also will bless you with peace, hope, and a strong faith to move forward and upward.”

To read a more detail summary of the devotional see the Church News.

On Sunday, February 21, Elder Neil L. Andersen and his wife, Sister Kathy Andersen, spoke in an area devotional for French-speaking young adults. Members from Tahiti to France were touched by the message, which was delivered in French by both Elder and Sister Andersen.

Church News reported that Rebecca Constant, a member in the French archipelago of Guadeloupe in the Caribbean, said, “Watching this spiritual meeting, I was first touched because it is the first time that Church leaders have spoken to us in French without the help of translators.”

In his address, Elder Andersen shared six points of belief that can help strengthen and inspire young adults:

Elder Andersen closed his message of hope by encouraging members to maintain their faith in Christ.

“As your friend and fellow disciple, with no motivation except my love and respect for you, I assure you that your faith in Jesus Christ is not in vain,” he said. “You will see Him again. All the world will know He is the Son of God. I have come to know Him and feel His presence. I witness with certainty that He lives, that He is resurrected, and that His love for us is beyond description.”

You can read a more of Elder and Sister Andersen’s remarks at Church News.

This devotional is the first of six area devotionals for young adults to be held in February and March of 2021. When completed, these devotionals from six apostles will have reached Latter-day Saints on every continent.

► You may also like: Save the dates: 6 area devotionals for young adults will reach every continent

On February 23, 2021, Elder Robert C. Gay of the Presidency of the Seventy told students at BYU–Hawaii that in order for “relationships to thrive, for societies to flourish, and for mankind to fulfill his potential, we must choose to serve.”

Then he stated three kinds of service people should embrace in their lives.

First, Elder Gay said we can “serve God by knowing the truth.” He encouraged listeners to find “your own sacred grove where you can come to know from your own individual and independent awareness of the underlying truth and reality of the living Christ, His restored gospel, and how you’re to move your life forward from this place and time.”

Next, Elder Gay taught that we can “serve God by forsaking the world.” He encouraged students to seek revelation from the Lord to direct them in important areas of their lives. “Please understand and know that you cannot do the work God has called you to do through the world’s ways,” he said.

Lastly, listeners were encouraged to serve by “lifting the disenfranchised and loving your enemies.”

“There is no room for racism and discrimination in the gospel and Church of Christ,” Elder Gay said. “To see others as God sees them requires the sacrifice of any or all justifications, even when resulting from offensive words or actions.”

The 10th RootsTech event will be held February 25–27. Although the event is typically hosted in person in Salt Lake City, this year marks the first virtual-only gathering due to COVID-19. And for the first time, nearly 2,000 on-demand sessions will be available for free for 365 days.

To read about what Church leaders are saying about RootsTech this year, see 7 reasons you don't want to miss RootsTech 2021.

We are living in a time that is so specific to this moment. It is clear to me that the pandemic did not catch the Lord...

Tonight at a devotional for French-speaking young adults, Kathy and I shared our thoughts and feelings about the...Posted by Neil L. Andersen on Sunday, February 21, 2021

Have you had a chance to see the Friend to Friend program yet? I was so honored to participate in the Portuguese...Posted by Lisa L. Harkness on Sunday, February 21, 2021

Cover image courtesy of The Church of Jesus Christ of Latter-day Saints.