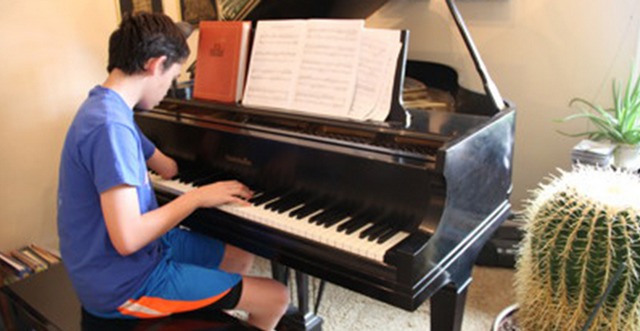 “How do you play the cello?” one might ask 15-year-old Michael Spencer of Provo, Utah.

At first glance, it’s hard to see how someone missing half his left arm can play any sort of musical instrument that requires two hands. But with the cello over one knee and the bow in his right hand, Michael uses the funny bone on his left elbow to feel for the notes on the string. “He says he finds it quite ‘humerus,’” said his mother, Rita Spencer.

Michael, a member of the Edgemont 2nd Ward, Provo Utah Edgemont Stake, was born with Amniotic Band Syndrome. Fibers from the amniotic sac in his mother’s womb wrapped around his limbs, amputating his left arm. They wrapped around his legs as well, causing him to be born with a club foot that took several surgeries to correct. Despite this, Sister Spencer said, “He is such a do-it guy. Just do it. He doesn’t count handicaps.”

Music PianoMusic,Piano,
Comments and feedback can be sent to feedback@ldsliving.com