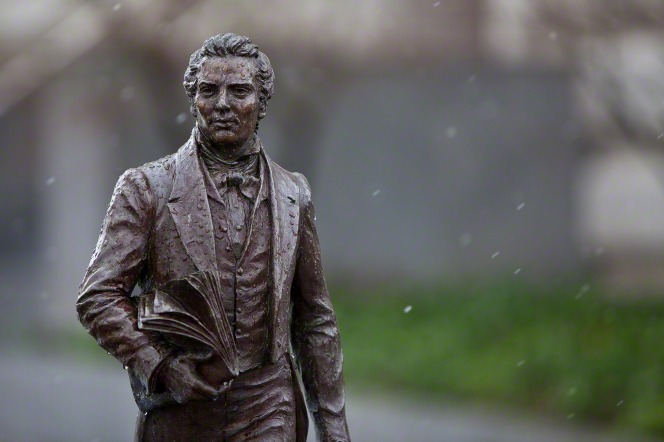 Teachings of Ezra Taft Benson Lesson 7: Joseph Smith, an Instrument in the Hands of the Lord

It is true that the Lord can, and does do His own work, but He uses us as instruments in His hands to get the work done. Joseph Smith was arguably the best tool in the shed. As the prophet the Lord used to open the last and greatest of all the dispensations, Joseph had many unique challenges to deal with.

Section one of the lesson opens with this title, “Joseph Smith’s First Vision was the greatest event in this world since the Resurrection of Jesus Christ.” I read that numerous times, and just moved on without even blinking. After about the sixth time I read it, I stopped. Wait a minute. What? I read it again. All the events I could think of that have happened between Christ’s resurrection and now started to flood my head. We discovered that the world was round. We discovered a whole new hemisphere to our planet. We even flew away from our planet and walked on the moon. We have cured diseases on a global scale, invented cheese in a can, and microwaves. We have developed the Internet and global banking. We have rewritten how whole civilizations are founded and destroyed.

Yet still, there has not been anything of greater importance to the family of man, since the resurrection than Joseph Smith’s first vision. According to President Benson, you measure an event’s worth and importance by how many people it effects, and by how long the results last. Based on this definition, the two most important events in the history of the world, since the fall of Adam and Eve started the family of man, are the resurrection of Christ, and Joseph Smith’s first vision. Both of them have eternal consequences, and both of them affect every human to ever live on earth.

President Benson described the importance of this vision this way.

"The most evident truth that emerged from the Prophet’s experience in 1820 was the reality of God’s existence and the fact that Jesus Christ was indeed resurrected. He saw them as separate, distinct, glorified Personages who spoke to him as one man speaks to another."

Joseph’s vision opened the spiritual floodgates. The priesthood was restored, covenants followed, temples were built, ordinances performed, and now salvation is offered on a global scale to not just a few living saints, but to all the living and to all the dead throughout the history of the world. We now have a complete course correction from where Christianity was headed. We have a more complete understanding of God our Father, of Christ our Savior, and of the Holy Spirit. Ancient scripture has been revealed and re-translated so we know more about what other prophets have written than the world has known about in more than 2,000 years. The list of blessings that came from that vision is very long.

The Kingdom of God

For centuries Christians have prayed that the kingdom of God would come to the earth so they could have its blessings and protection. Through Joseph Smith that kingdom was restored once again. Christ had set up his gospel, his kingdom on earth, complete with his priesthood power, apostles, and all the ordinances of salvation. Unfortunately, apostasy and the death of those who held the keys (or administrative power) in God’s earthly kingdom took their toll, and all that was left was the husk of the former glory that was Christ’s Church. The doctrines were changed, ordinances were lost or changed, and revelation from God stopped.

To this day the Christian world claims that God no longer speaks to man through prophets. They contend that God finished his work and no more guidance and revelation will ever come again to mankind until Christ returns to personally govern the earth. The problems of each era have to be solved by the wisdom of man through individual interpretation of the Bible. There is no such thing any more as a definitive answer from God.

With the restoration of the priesthood through Joseph Smith came the gift of the Holy Ghost. The purpose of the Holy Ghost is to testify of Christ and to teach all truth. Revelations come through the power of the Holy Ghost. As each member of the Church is baptized and has hands laid upon their heads by those with priesthood authority, they are given the gift of the Holy Ghost. Through obedience to the commandments and righteous living, every member of the Church is entitled to personal revelation. This is why the Book of Mormon can make the claim that if we are sincere in our desire to know the truth, if we ask God, in the name of the Son, He will reveal the truth of the Book of Mormon to us--personally. Millions have put that promise to the test and have received their answer directly from God.

God’s kingdom is once again on the earth, complete with a prophet to speak for the Lord, the Holy Ghost to give personal revelation, and the priesthood power to protect and bless the lives of the Saints. All this is a witness of Joseph’s calling as a prophet.

The kingdom of God is not just an organization on earth. His kingdom includes, and operates, on both sides of the veil. Those who had great roles in moving God’s work forward in the premortal life, continued their work in this life, and then continue it in the spirit world. Joseph’s work did not end when he was killed. He continues to act as the head of this dispensation, helping to move the work along from the other side of the veil. This is why you hear people in the Church talk about him as having been a prophet and that he is still a prophet. His work is ongoing.

In the words of President Benson:

Kelly likes to keep the gospel simple. For more of his articles and lesson helps go to his website, http://mormonbasics.com.