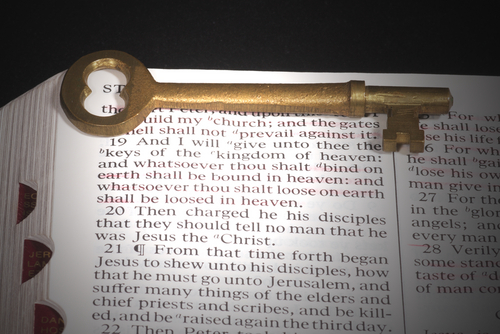 Teachings of Gordon B. Hinckley Lesson 19: "Priesthood Leadership in the Church of Jesus Christ"

Those who are called to priesthood leadership positions have special opportunities for service, since leadership in the kingdom is all about service. The first part of this lesson focuses on the training and experiences those who eventually become the prophet have to pass through before they are ready for the mantle of prophet.

Each man came to the Presidency after many years of experience as a member of the Council of the Twelve and in other capacities. The Lord refined and polished each one, let him know discouragement and failure, let him experience illness and in some cases deep sorrow. All of this became part of a great refining process, and the effect of that process became beautifully evident in their lives.

Reading the above paragraph makes it clear that becoming a prophet requires years of honing and polishing by the Lord. None of them have had an easy time in their journey through life. They have all been tested and proven faithful in all things the Lord has required of them.

Very few priesthood holders ever become prophets, but that doesn’t mean that we don’t all require the same refining experiences to make us better servants and better stewards over the Lord’s affairs in mortality.

Succession in the Presidency

In various dispensations the next prophet was chosen sometimes by bloodline, and sometimes by calling. In Adam’s day, the priesthood was passed from father to firstborn son, and so too the keys of the priesthood. In the days of the Mosaic Law, the Lord called prophets through revelation, either personally or through the living prophet.

In this dispensation, He has established the succession in the position of prophet through the process of death of the senior apostle. All the prophets are also apostles. The calling to the apostleship is for life. You serve until you die. The senior apostle is the current prophet, the only one who can independently exercise all the keys and powers of the priesthood on the earth.

It is understood by all the apostles that once called you serve until the Lord calls you to the other side of the veil. You serve in whatever capacity the prophet or the President of the Quorum of the Twelve calls you to do. When the prophet dies the Quorum of the First Presidency is dissolved, and everyone drops back into their position of seniority in the body of the apostles.

Once the senior apostle has been set apart as the new prophet, he calls two from the Twelve to serve as his counselors. The one who was third in line is now second in line. He becomes the President of the Twelve. The prophet then calls a new apostle to fill the vacancy of the apostle who just died.

This is the way the Lord has established the succession in the Presidency in the last days. It is clean, predictable, organized, and the Lord has complete control over who the next prophet will be through the process of life/death, and date of ordination.

In the natural course of events, vacancies occur in that council and new appointments are made. Under this process a particular man becomes the senior Apostle. Residing latent in him, and in his associate Brethren, given to each at the time of ordination, are all of the keys of the priesthood. But authority to exercise those keys is restricted to the President of the Church. At [the prophet’s] passing, that authority becomes operative in the senior Apostle, who is then named, set apart, and ordained a prophet and President by his associates of the Council of the Twelve.

When a man has been selected as an apostle, has been sent all over the world and has worn out his life in the service of God’s children, and finally, in his advanced years has been called to be the Lord’s mouthpiece on earth, there are bound to be physical trials that have to be dealt with. The prophet is still mortal, just like the rest of us. We all have surprises in our later years as our body begins to break down from years of hard work. Prophets are no different. They just have to deal with it on top of running the Lord’s kingdom each day. This is why the Lord always provides the prophet with capable counselors.

It is important to remember that the Quorum of the First Presidency and the Council of the Twelve Apostles are equal in capacity. The Twelve take their direction from the First Presidency, but if all three of the Presidency are unable to fulfill the full measure of their callings, the Twelve can pick up the slack. The Lord has made provisions for the advanced years of his chosen servants.

All 15 of these brethren are apostles. All of them have been given the keys of the kingdom and are prophets, seers, and revelators. Only one at a time can exercise all those keys, but the Twelve can exercise them as a quorum if the need arises.

President Hinckley said, “I likewise accept the responsibility, acting with my Brethren, to do all we can to move forward this holy work in a spirit of consecration, love, humility, duty, and loyalty.” This sentiment should be our own personal priesthood mantra. Can you imagine how powerful the priesthood quorums of the Church would become if every priesthood holder felt this way?

Apostles have a special responsibility in their priesthood calling. Once called and given the mantle of the apostleship, “their one chief concern must be the advancement of the work of God on the earth. They must be concerned with the welfare of our Father’s children, both those within the Church and those out of the Church. They must do all that they can to give comfort to those who mourn, to give strength to those who are weak, to give encouragement to those who falter, to befriend the friendless, to nurture the destitute, to bless the sick, to bear witness, not out of belief but out of a certain knowledge of the Son of God, their Friend and Master, whose servants they are.”

An example of unity

Watch how the apostles work with each other and how they make decisions. They may start a discussion about a subject, each having their own opinion and preferences as to how the issue should be dealt with. But as they seek to be led by the Spirit they gradually come into agreement with each other until they are all united in their course. Once the prophet has told them what the Lord wants them to do, they unite behind the prophet and support him completely. You will never hear of dissenting Brethren.

When we serve in councils of the Church we should likewise seek unity in all that we discuss and do when it is time to move forward with a decision. We have the example of the Godhead, and of the leading priesthood quorums of the Church to look to for examples as to how this is done.

The burden of the stake president and bishop

The stake president is like the prophet to a small geographical area. As the advisor to the bishop, his responsibility is to help build a cohesiveness within the stake. We often discount the heavy burden of the stake presidency because we are so wrapped up in the cares of our individual wards. But the stake president has been trained by the General Authorities and has to answer to the apostles and the Quorum of the Seventy. They have a great responsibility to bring the service rendered by the highest leaders of the church down to our level as Church members.

As parents, we sometimes find it difficult to reach one of our children who seems to be losing their way. The bishop of a ward has several hundred to look after, not just a few. The bishop relies heavily on the support of his congregation. The job of a bishop cannot be fulfilled alone, it requires support from every organization and every priesthood holder.

We all answer to a bishop or branch president. He is the most basic judge in Israel, and we each have to face him to declare our basic worthiness for tithes and offerings, and for entrance to the temple. The bishop is the most basic shepherd of the Lord’s people in His kingdom.