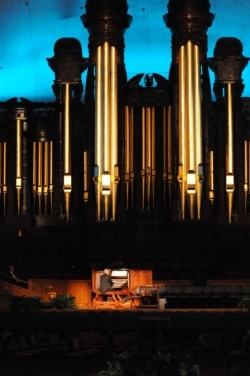 Two special pre-conference events have been arranged for those attending the Southwest Liturgical Conference, scheduled for Feb. 2-5 at the Salt Palace in Salt Lake City: a tour of Temple Square that will include a question-and-answer with a Mormon Tabernacle Choir organist and choir director, and a composer spotlight featuring David Kauffman and William Gokelman, whose "Mass of Renewal" took first place at the National Association of Pastoral Musicians contest.

Kauffman and Gokelman are well-known liturgical composers, and the spotlight will be a tremendous opportunity for those attending the conference to speak with them, said Karin Hurley, core program committee chairperson for the Southwest Liturgical Conference.

The "Mass of Renewal" will be published as part of the music resources that will accompany the changes to the Roman Missal, which will be implemented the first Sunday of Advent.

The spotlight will be "almost like a musical short course to us," allowing the composers to teach the music, which is both prayerful and spiritual, Hurley said. "I think the people that attend will come away from it filled … with the Holy Spirit."
Read the rest of this story at icatholic.org