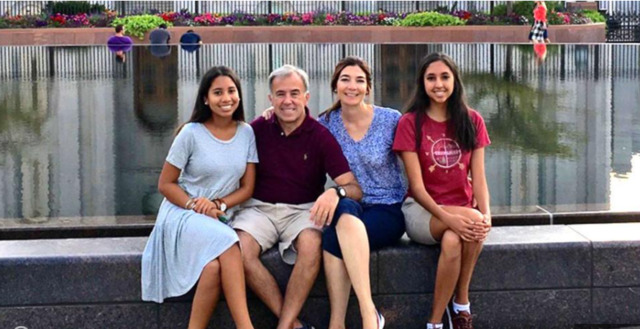 “To adopt is to be willing to have a personal love lesson from heaven”—that is how Sister Andrea Veronica Munoz Spannaus, Relief Society Advisory Council Member, describes her experience adopting her two daughters.

On the latest episode of the Latter-day Saint Women podcast, Sister Spannaus said she battled ovarian cancer when she was 12 years old, so she and her husband knew when they married that adoption would play a role in their family. What they didn’t know was the trying, yet testimony-building experiences they would have as they adopted their two girls.

“With our first daughter, when the birth mother chose us to be the parents of her baby, we were so happy—so thrilled. After years. . . it was our time,” Sister Spannaus says.

Before they knew the baby’s gender, Sister Spannaus had a special experience that she would come to rely on in the difficult months to come. One day, a dear friend told her about a special dream in which she’d seen Sister Spannaus walking into church holding a baby girl in her arms.

“After that, I knew the baby would be a girl,” Sister Spannaus says. Eight months later, she had another important spiritual experience: While driving to work, she received a strong impression that the baby would be born that day. And she was right—her husband called around noon to let her know the baby had been born and that it was a girl.

“[Those] two spiritual hints were key for me to survive the next, almost three months, when things got really complicated,” says Sister Spannaus.

As the couple prepared to go pick up their new daughter, they received a phone call letting them know there was a problem with the adoption papers. The news brought them to tears, and what they hoped could be resolved in a few days stretched into three devastatingly long months.

“Those three months were the worst three months of my life. [I] thought at that time, ‘I have a daughter and I can't be with her.’ For me, that was really, really hard. At the beginning, I was really mad, and then I was sad—really sad—and then I was humble,” Sister Spannaus says.

In that state of humility, she came across a quote from Elder Maxwell about patience that changed how she saw the experience.

“It said something like, when in the middle of our trials, if we don’t have patience, we cannot learn anything. . . but if we have patience, it will make all the difference,” she says. “I tried to do my best to apply that good counsel to my life, and after almost three long months, we were able to go get her and bring Sophia home.”

► You may also like: What helped this Latter-day Saint woman keep her faith after 3 of her adopted children were abruptly taken back

A few years after adopting Sophia, Sister Spannaus learned she was expecting a baby, but to her great disappointment, the pregnancy ended early on.

“A few months later, we receive a phone call to tell us that there was a mother who wanted to give her baby for adoption. So that was a very happy day. We went [and talked to the mother] and she told us she would deliver in a couple of months,” Sister Spannaus says.

That night, she lay awake in bed as she processed the emotions and thoughts of the upcoming adoption. Then she realized a tender detail she hadn’t thought of when talking with the child’s mother.

Sister Spannaus and her husband would still have to wait almost five years before the adoption papers for their second daughter were finalized, but when they were finally able to kneel at the alter in the temple, they received the rewards of their patience.

“[On our] sealing day, the four of us kneeled at the altar of the temple surrounded by our family and our dear friends, [and] that was another love sign from heaven,” she says. “What a wonderful life. This is how I love to be alive, having eyes to see these love tokens from our God. No doubt He's a merciful God. He will fight our battles and He will teach us along the way. And if we have patience? Even better.”

Listen to other experiences from Sister Spannaus's life on the Latter-day Saint Women podcast.

► You may also like: 10 tips for cultivating patience in an impatient world