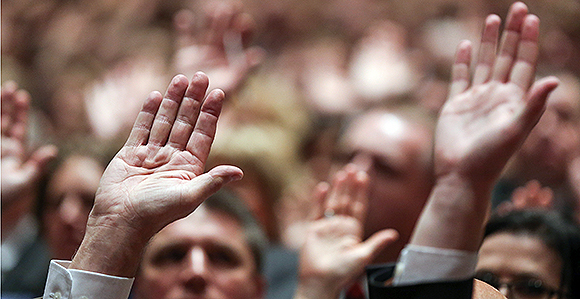 General conference swiftly approaches. This is a cherished time of year. Whether conference occurs in the fire of fall colors or in the sweetness of life-giving spring returning to earth, hearing the word of God through His chosen leaders is always the right time of year.

Each conference we are presented with the privilege to sustain Church leaders. Typically the sustaining of Church leaders happens in the Saturday afternoon session of general conference. The introductory words for the sustaining may be similar to what we heard from President Eyring during the October 2018 general conference: “Brothers and sisters, I will now present to you the General Authorities, Area Seventies, and General Auxiliary Presidencies of the Church for your sustaining vote.”

These words may not feel particularly revelatory or stunning. For many of us in the Church, so often have we participated in formal acts of sustaining that we seldom consider the significance or meaning of the words or actions we employ. Let’s pause for a few minutes to more seriously consider what we are doing.

Here are some reasons why I think the sustaining of Church leaders is such a covenantally significant event in general conference.

First, we are asked to sustain Church leaders, not to obey them.

Church leaders never ask us to obey them but to sustain them. Sure, these two words seem interchangeable, and if I truly do sustain God’s chosen servants then I should also be willing to obey the voice of the Lord as revealed through them. But my obedience to the word of God, as revealed through living prophets, is a consequence of my choice to sustain, not a requirement.

I may claim to sustain the Brethren but then, of my own free will and choice, not obey what they teach. In so doing, I nullify any words or actions of sustaining that I have promised.

This beautiful word “succor,” which literally means “to run or flow underneath,” is intimately connected to the word sustain. And, as I’ve written elsewhere, “no matter how far you have been carried under [in suffering], Jesus has descended below all and He flows under you to support you. At all times. In all places” (see "Why Suffering Is Good For Us and Can Make Us Happy").

Third, we are voting or vowing our enduring support.

The Church is not a democracy as the world understands the word. We are a Church in the true sense of the Greek word ekklesia: “those called out [of the world to join a covenantal community].” We do not surrender our agency by joining a covenantal community. Instead, we take upon ourselves mutually reinforcing obligations to sustain each other in truth and love. Our voice is not lost in the mix. Rather, the community cannot exist without our individual voice joining the chorus of unified voices bringing harmony to the community.

And what does the word “vote” really mean? To vow or dedicate. We make a solemn pledge and promise, we bind ourselves in a commitment. We are making and enacting a covenant, the most sacred form of promise-making and keeping.

Our sustaining vote of the Church leaders is our vow or dedication to support them, to bear them up, to suffer and endure with them.

Fourth, we raise our hands to the square to signal our support.

Why is the sustaining of church leaders one of the most covenantally ennobling and significant events of general conference?

In the act of sustaining Church leaders we become like Jesus.

We follow in the footsteps of Jesus when we use our agency to bind ourselves into a covenantal community through the solemn pledge to enduringly support each other, especially God’s chosen leaders.