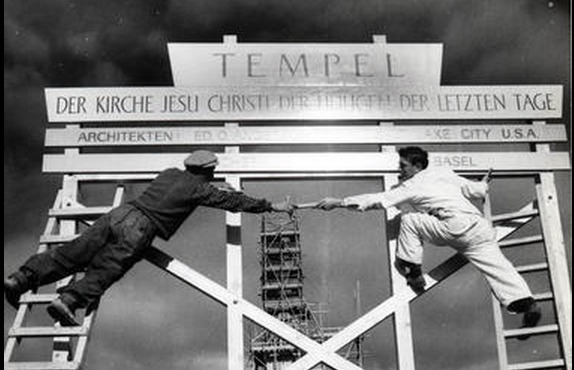 MR says: The first temple in Europe just had its 60th birthday. Check out these 5 interesting facts about how this temple came to be.

In 1906, The Church of Jesus Christ of Latter-day Saints had four operating temples, all located in Utah.

In August of that year, President Joseph F. Smith attended a mission conference in Bern, Switzerland, and told the Saints the time would come when “temples of God … will be erected in the divers countries of the earth, for the gospel must be spread over all the world, until the knowledge of God covers the earth as the waters the great depths," according to the book "The First 100 Temples" by Chad Hawkins.

The Bern Switzerland Temple, located in a northern suburb of Zollikofen, was dedicated Sept. 11-15, 1955, becoming the church’s ninth temple and its first on the European continent. This month marks the 60th anniversary of its dedication.

Like each of the LDS Church’s temples, the Swiss temple has a unique story and history. In celebration of its 60-year milestone, here are five interesting facts about the Bern Switzerland Temple.

In the fall of 1953, President Hinckley, then an employee in the church’s missionary department, was called in to meet with President McKay and given a daunting assignment. The late church president related the experience in great detail in his biography “Go Forward With Faith” by Sheri Dew.

“As you know, we are building a temple in Switzerland, and it will be different from our other temples in that it must serve members who speak in many languages,” President McKay told him. “I want you to find a way to present the temple instruction in the various languages of Europe while using a minimum number of temple workers.”