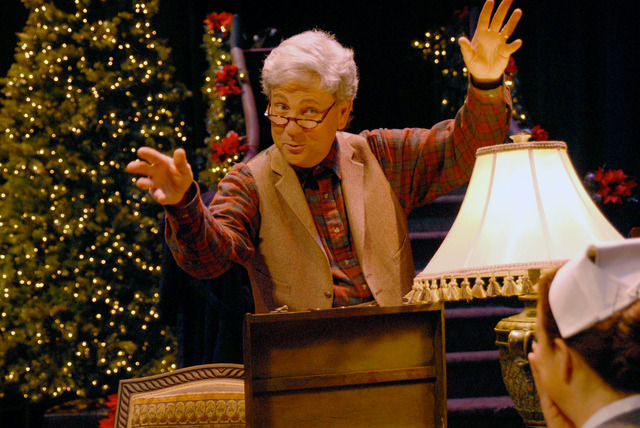 It started simply. Michael McLean was seated at his piano when he wondered: “What if I met the innkeeper who turned away Joseph and Mary?” And from that one thought, a new Christmas tradition was born—a tradition that would touch the hearts of countless people through original music and the stories of “forgotten” characters of the Nativity story.

With that first thought, McLean began composing a song from the innkeeper’s perspective called “Let Him In.” And as he wrote that song, another realization dawned: he wrote it because, as he says, “I’m that guy. I am exactly that guy. I’m not a bad guy. I’m just too busy. I miss great moments because I’m just trying to pay the light bill and keep the inn full.”

Soon McLean was wondering who else he was like. A shepherd who slept through Christ’s birth and has to decide whether to believe the story after hearing it secondhand. Or Joseph as a struggling father—“What did he feel like as the dad of Jesus? How do you criticize your kid? What if he had a bad day and he shouted at Jesus?” Soon other characters and songs followed.

McLean wrote these songs initially just as an album, but he realized he needed a story to connect them all together. He settled on a story about a nurse named Connie Lou who cares for John, an elderly patient who claims to have been alive for more than 2,000 years and interacted with all those whose songs he shares.

In April of 1991, McLean approached Deseret Book and proposed his idea. “If you’re going to do it for this Christmas,” he was told, “you’ll have to have it done by the thirteenth.” It was the sixth.

So, after writing almost all night and realizing he needed to sleep, he tried an experiment. “I told my creative unconscious, ‘You know, I’ve gotta sleep, but you can work on this all night long.’” And with that, he went to bed.

In the morning, he had an “appointment” with his subconscious and typed until he had to leave for work, then told his subconscious the same thing he had told it the night before. When he got home in the evening, he would sit as his computer and type for four to five hours. The process continued like that for a week. At the end, the story was written, the songs were completed, and the project was ready to move forward.

That first year, McLean did about 30 performances to promote the project, the book and the music sold, and he thought that was that.

Constant Expansion
The next year McLean received a request to do the show again. His response: “Are you kidding me? Why would you want to sit through this twice?”

But he began making preparations for a second tour and thinking of ways to improve the show. In the first years, McLean made simple revisions like adding outfits for the characters and creating better ornaments for the show. He also began figuring out a way to teach the choirs the music much more quickly, which was important since he would show up the day of the performance and quickly have to pull the entire production together.

Eventually, the revisions went deeper. The story itself was rearranged to help with the pacing. “Then what I found out was that the story was way too heavy—women could maybe stand it, but their husbands were ready to bail at intermission, if there was one, so they could go listen to the game or anything other than this super touchy, cheery, weepy thing.” So McLean began adlibbing and adding in more jokes, making notes each night of the parts that needed to be improved. Eventually, he began to develop a rough script just for himself. Some new songs were also incorporated into the performance.

After about seven or eight years, McLean decided that instead of him singing all the songs except the female ones, he should bring in other singers as well to perform all the solos.

Then came the biggest change of all in 2006. His son Scott approached him with a proposition: what if they made the performance into a real play? Until this point, McLean had still been playing all the parts, narrating a story rather than performing a theatrical piece, with soloists to perform the various songs. Scott, who had a master’s in acting, would write a completely new stage adaptation of the book.

“I didn’t know if this would work. This would require me to actually be an actor,” McLean says. “We did the show, and I was terrified that people would just leave in droves.”

But with that transition and other improvements year after year, the show finally reached its full potential. “I fell absolutely, slam dunk, in love with what the show had become,” McLean says.

Growing Pains
But as the show grew, so did the opportunities for accidents. Sometimes they wouldn’t have a spotlight, or the people who were running the equipment didn’t know how to do so properly. Sometimes a kid in the choir would hide the ornaments for the show as a joke. Sometimes the choir didn’t know their music, and once the group that was supposed to sing the part of “Homeless”—an a cappella song—blew the wrong pitch, which meant that they all ended up singing in different keys. McLean remembers another performance in which the choir was so old, they slept through the show.

But sometimes, McLean himself was at the center of the mishaps. Once he was off stage for a costume change and bathroom break—only to learn that his microphone wasn’t turned off as he went about his business and flushed the toilet.

During one tour, McLean took only one night off for a surgery and then was back on stage again the next night. “So I had to decide if I was going to take my pain meds, which would make me loopy and forget my lyrics, or whether or not I was going to not take them, and be in so much pain I couldn’t sit,” he says. “It was the most brilliant performance of The Forgotten Carols I’d ever done, because I walked like a guy who’d been around for 2,000 years and couldn’t sit down.”

A Show for Everyone
Despite the many mishaps, the show has earned its spot in the Christmas canon. “The reason this works is because this is the one Christmas show you go to that is unabashedly, unquestionably, clearly about Jesus. This is not a Mormon thing about Jesus—this is about Jesus,” McLean says.

While many people feel that the reason the show works is due to McLean’s charm and passion for the story and its message, McLean himself is quick to dismiss that idea.

With that at its heart, it’s no wonder so many have been touched so deeply by the show.

One night, a woman came up to him after the show and said that her best friend had been raped on Christmas Eve eight years earlier and had not been able to tolerate the season since, but after seeing the show, she had decided she could like it again. “How do I thank the guy that gave Christmas back to my best friend?” she asked.

Another man came with his son and explained that 11 years earlier, McLean had performed The Forgotten Carols in Las Vegas, where the man had been homeless. “You sent someone down to the homeless shelter and said, ‘Anyone who wants to see this show can come for free.’ And I was strung out on drugs and trying to get straight and I didn’t know what it was but I came. . . . I wanted you to know that that show changed me. And I wanted you to meet my son.”

One family had come every year, and their father always purchased the tickets. But one year he suddenly passed away after already having bought them. They came anyway—on the same day as his funeral. “When we linked arms and sang ‘We Can Be Together Forever,’” they wrote him later, “our dad was there. Don’t ever change that part of the show.”

Continuing Progress
The evolution of The Forgotten Carols hasn’t stopped yet. McLean is working with translators to create a Ukrainian version in addition to the French and German ones already being performed in Europe.

And the show won’t be stopping—at least for quite a while. “The great thing about playing a guy that’s two thousand years old is that I’ll never be too old,” McLean says. “But there’s going to come a time when I can’t do [the show]. So I want to treasure every moment that I have to do this."

Lds Life Christmas MusicalChristmas,Musical,Lds Life
Comments and feedback can be sent to feedback@ldsliving.com