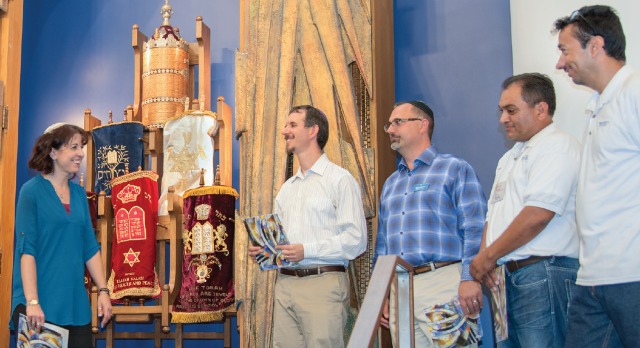 On February 15, 2014, Rabbi Heidi Cohen walked into her Jewish synagogue prepared to lead a worship service. Instead, she found herself—and her congregation—without a home.

Temple Beth Sholom, located in Santa Ana, California, served Jewish people in Orange County for more than 70 years. But when a freezer in its kitchen experienced electrical failure, it caused a fire that damaged the building so extensively it had to be taken down to the studs.

“We were devastated,” says Cohen, “and we were uncertain what the future held.”

Hesitant to join with another Jewish congregation and reluctant to worship in a room with a crucifix, Cohen didn’t know where to turn.

That was when she heard about Tom Thorkelson and the Mormons.

Thorkelson has been the Church’s director of interfaith relations in Orange County for over 28 years, so when Rabbi Cohen called him, he jumped at the chance to help. “I was so sorry to hear about their synagogue, but so happy we could be of assistance,” he says.

Though Cohen didn’t realize it at first, she discovered that the solution to her problem sat just a mile from Temple Beth Sholom. Thorkelson approached President Matt Goodman of the Orange California Stake with a proposal to share the LDS stake center on nearby Yorba Street.

Goodman readily agreed. “We are all children of God, and we are all brothers and sisters,” he says. “We ought to be willing to help when others are in need.”

Little did these Church leaders know that they were actually returning a favor from a half-century prior, when Latter-day Saints in Orange County found themselves without a place of worship while the Yorba building was under construction. During that lengthy period of transition, they had found sanctuary in perhaps the most poetic location possible: Temple Beth Sholom.

Many Orange Stake members, however, recalled memories of having Primary in garages or kitchens before those at the Jewish synagogue opened their doors to them until the stake center was dedicated in 1965. These members quickly reminded their stake president of this former kindness from the Jewish community. “It was such a blessing to find that out,” recalls Goodman. “The experience became even more personal.”

Within two weeks of the fire, the congregation of Temple Beth Sholom had their first service in the Yorba building. The Jewish Sabbath begins at sundown on Friday and ends at sundown on Saturday, so scheduling conflicts in the stake center were practically non-existent. “It was not a great hardship,” says Goodman. “We just asked the wards not to schedule anything in the building on Friday nights. We were happy to do that.”

The stake asked for volunteers to sign up as hosts and hostesses during the Jewish worship services. Their role was simple—make sure the building was open and that all the facilities, including the kitchen and cultural hall, were accessible.

Melissa Peters, a member of the Palmyra Ward who hosted with her husband on several occasions, enjoyed the Jewish services immensely. “They were so welcoming toward us,” she remembers. “They made us feel right at home.”

But the Peters weren’t the only ones who felt at home—the similarities between the stake center chapel and the Temple Beth Sholom sanctuary were striking.

“When we walked in, at first we thought, ‘Wow, the colors are the same as our old colors were,’” Cohen shares, and then jokes, “Although I have to say, [the stake center’s] pews are a little closer together—not as much leg room!”

Weekly services became a routine, and it wasn’t long before the Latter-day Saints and Jews started to gain an appreciation for one another’s values. “We differ in some ways,” acknowledges Cohen, “but the focus on family, taking care of one another, being a part of a community, feeding the poor and hungry—there’s definite similarity.”

“Sometimes we don’t pay attention to other religions and cultures, and so we can develop a sort of mono-vision,” she continues, “but we all have a lot more in common than we think.”

Through this experience, Cohen and her congregation discovered what the Church is all about. “We learned a lot about them, and I think they learned a lot about us,” she explains. “A lot of us didn’t know about Mormons, or we’d heard things that maybe were not so nice, but we all walked away from this thinking, ‘Oh, that wasn’t right.’ The key is to respect each other’s opinions and ideas.”

President Goodman adds that he gained an entirely new level of respect for Jewish theology. “They have a great respect for the word of God,” he says. “They have great reverence for their Torah, for sacred things . . . the feeling I kept having was that despite our differences, we worship the same God.”

“As I became friends with members of their congregation, they’d invite me to sit with them,” he continues. “I’d participate in all aspects of their worship services, reading from their prayer book . . . I was even invited to attend Passover services in one of their homes.”

Goodman accepted the invitation, and his experience was deeply spiritual. “It is a beautiful, sacred story,” he recalls. “To hear their reverence for it, to be in their home, and to be treated like family was amazing.” 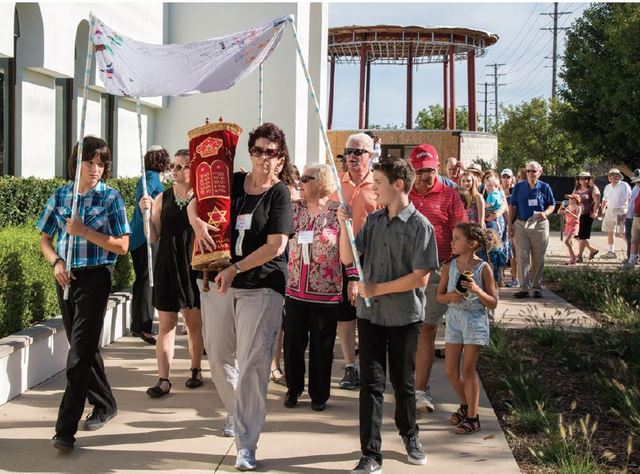 On August 30, 2015, Temple Beth Sholom held a dedication service for their rebuilt synagogue. In a program called the Return and Renewal, Rabbi Cohen brought the Torah scrolls (which had been restored after being damaged by smoke) back to the ark in which they had originally been preserved. President Goodman delivered an address at the service, and several of the local Latter-day Saints were in attendance.

“It was quite special,” he recalls. “It was a beautiful ceremony.”

Although Temple Beth Sholom has been rebuilt and Rabbi Cohen and her congregation have now returned, the story is far from over—the two groups continue to display an attitude of interfaith service.

One day early in 2015, Sister Phyllis Ashton got a call from the leader of the Temple Beth Sholom Sisterhood. Sister Ashton, who was serving as the stake Relief Society president at the time, relates the following experience:

“She told me that her Sisterhood had a meeting and decided they wanted to give a donation to the Relief Society—to the charity of our choosing . . . we elected to send the money to the Church Humanitarian Fund. The Sisterhood came to one of our Relief Society meetings and presented the donation in person, grateful that their contribution was going to a safe place that would be used for a people in need. It was a tremendously sacred time.”

And the giving hasn’t stopped there. One of the things Rabbi Cohen noticed during her time attending the stake center was that the entrances could be more accessible to handicapped people. She approached President Goodman and told him that Temple Beth Sholom wanted to provide the building with a ramp as a token of their appreciation. The ramp was completed in September 2015.

Reaching Out to All

Rabbi Cohen hopes that all who hear about their story can heed the lesson that’s been in action over the past half-century.

“We’ve seen acceptance, we’ve seen compassion, we’ve seen love,” she says. “We should be much more aware of those in need around us and do what we can.”

President Goodman says that his eyes were opened to the possibilities of interfaith relationships. “We ought to sit down with one another and form friendships. When two groups break bread together, it leads to warmth, caring, and understanding,” he shares. “That’s a great principle for all of us to apply, especially when it comes to brothers and sisters not of our own faith. We should all jump at the chance for opportunities like this.”

Meanwhile, though Tom Thorkelson’s involvement in this particular story has ended, he’ll keep facilitating relationships like this—just as he has for nearly three decades.

“All too often, we fall into an atmosphere of exclusivity,” he admits. “It’s not just us—all faiths can do it to some degree. But it can cause other people to feel uncomfortable or shy away. I have a witness of the restored Church . . . and I’m grateful for the truth and virtue that’s found in other faiths around the globe.”

He continues, “First and foremost, I want to help people have a relationship with God. Sometimes that’s in our church, sometimes it’s in another. But if you’re a Jew, I want you to be a better Jew. If you’re Catholic, I want you to be a better Catholic. I often bring people back into activity in their own faith. I tell them, ‘If you want to find out what I believe, I’d love to share it with you. But in the meantime, don’t just pass on religion!’ Simply put, whatever you are, be dedicated. If everyone lived the values and teachings of their religion, this world would be an amazing place.”

The Latter-day Saints in Orange County, California, live the teachings of their religion— and so do the Jews of Temple Beth Sholom. And their experience together truly has been amazing. What began as an electrical fire turned into a bonding of two groups of people—vastly different, but remarkably more similar than they first thought.

“This was beautiful for me and everyone else involved to be a part of,” says Sister Peters. “The relationship is going to last a long time.”

Read more inspiring stories like this one in the March/April 2016 issue of LDS Living magazine, available on deseretbook.com.