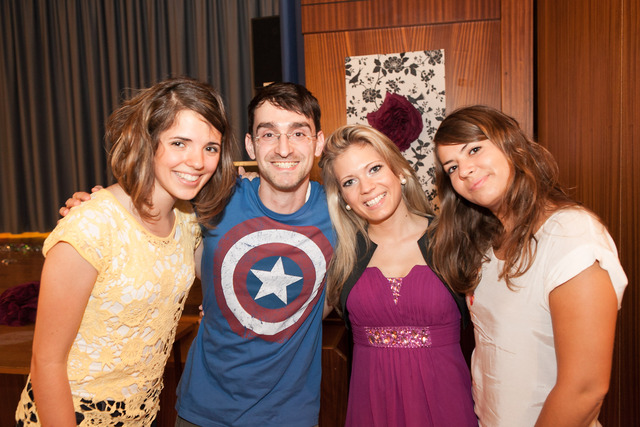 The LDS Church in Austria

The beginnings of the Church were not always so harmonious. In 1841, Elder Orson Hyde was on his way to dedicate Palestine to the preaching of the gospel when he stopped in Vienna. Although he felt prompted to preach the word among the people there, he was not commissioned to dedicate the land, and the country of Austria had to wait 25 more years for Orson Pratt and William W. Ritter to arrive and begin the missionary work there.

As the Church began to grow in this land far from Nauvoo, missionaries did not have an easy time of preaching the gospel. It was forbidden to distribute Church material or speak to anyone in public about the Church. The missionaries were usually threatened with imprisonment or banned from the country if they broke any of these laws. In 1883, Elder Biesinger, an early missionary of the Church, wrote a letter to the president of the European Mission in England, saying, “I have concluded that the time has not come for the gospel to be preached to the people of Austria. Either this, or I am not the man who is capable of helping the gospel to take root in this country.”

Luckily for the Austrian people, the Church finally did take root in their beloved land. In the early twentieth century, the first members of the Church met on a farm in the village of Haag am Hausruck amid the Upper-Austrian hills to hold their sacrament meetings. During most meetings, lying on the sacrament table next to the bread and water was Brother Huber’s loaded revolver. He kept it close at hand to ward off the loud mobs that would regularly interrupt the meetings with screams and threats, trying to intimidate the early Saints to renounce their new faith. But their faith would not be shaken.

World War I considerably slowed the work of the Church, but after the “war to end all wars” was finally over, the Church grew slowly but surely in Austria. Members in Austria were finally organized into a district in 1920, and a year later, the Relief Society took root in Vienna. But once again, war would keep the Church at bay. During World War II, missionaries who had been serving in Austria were called to leave their work and return to their homelands.

After the celebrations of V-day were over, Elder Ezra Taft Benson visited Vienna and organized the humanitarian aid programs for the country and for many other European countries. Those humanitarian efforts were fortified even more during the years of the Iron Curtain, when members donated food and clothing to the eastern side of the border. Throughout the rest of the twentieth century, the Church continued to gain members with stronger and stronger testimonies. Additional congregations were organized in Graz and Klagenfurt, with a meetinghouse in Salzburg. Innsbruck, Dornbirn, St. Pölten, Wiener Neustadt, Wels, and Villach joined the ranks over the years with congregations of their own.

Since its humble beginnings, the Church has grown to encompass more than 4,000 members in Austria. Within the Austrian stakes, there are sixteen wards or branches. Although these two stakes are sources of strength for these 4,000 members, membership does not even make up one-thousandth of the estimated Austrian population, which consists of over eight million people. And even though in 1955, the Church was granted official status by the state, many still view it as a sect.

“We are still not known by many of the Austrians,” says Church representative Elisabeth Pietsch. “This makes it difficult to convey the gospel message because a very basic understanding still has to be built. Sometimes people know about the Church but have incorrect information.”

“The comparable small number of members makes it hard for our youth to always remember that they are not alone,” says Pietsch. “They often are the only Mormon boy or girl in their school. They have to be tough!”

Seminary can be a great source of strength for the youth, but finding ways to bring the students together can be difficult because of distance.

“I’m a seminary teacher in my ward,” says Esther Duffles, an American young single adult who has lived in Austria for most of her 20s. “Almost every evening of the week, I visit one of the students at home, and from their computer, we Skype the others.” Creative solutions like this are common to the Austrian youth enrolled in seminary. Although just within the last twenty years, students in Austria have been allowed to take official classes in religion, and since The Church of Jesus Christ of Latter-day Saints is recognized by the state, seminary students can receive grades in seminary—and they will count toward their degrees.

The young single adults also face difficult trials in this alpine country. In Vienna, there are about fifty young single adults in the Church, and they are divided among five family wards. But despite not having a singles ward of their own, they have learned to band together in solidarity.

“There is no stereotypical young single adult in Vienna,” says Duffles. “Each represents another career, another university, another part of town.” These diverse YSAs meet in an old, renovated building that has been dedicated as a young single adult center. It is only about five minutes from the university—a great blessing for many members attending school in Vienna. Activities bring together these young members at least three times a week: Mondays for home evening, Wednesdays for institute, and Fridays for game nights. “We love to come together,” says Duffles.

Conventions are another way to meet even more members and make life-long friendships among the young European Saints. “This summer, Vienna hosted the German-speaking convention,” says Duffles. “We had firesides from area authorities and had political leaders to host a discussion panel. Sport days, service days, dances every night—really, a European convention is something everyone should try out!”

Despite the leaps and bounds that the Church has made since its early days in the 1800s, incorporating the culture of the gospel into the culture of Austria has still been a difficult hurdle to surmount. “The Austrian culture is very closely connected to the local history of the Catholic Church,” says Pietsch. The Austrian members come from a long line of Catholic tradition, with many beautiful cathedrals that stand as symbols of the Catholic heritage. Often, missionaries face the difficulty of teaching investigators who either strongly adhere to the Catholic tradition or have a total lack of interest in religion.

As recently as the 1950s, close to 90 percent of the population was Catholic. In recent years, Catholics have composed roughly 65 percent of the Austrian population. The people of Austria are proud of their Catholic heritage, but members of the Church have found ways to use their heritage and their LDS faith to create a new culture—a feat that sometimes requires a lot of bravery.

“As I was visiting a Catholic cathedral, I realized that these people have great-great-grandfathers who built these churches. It is the hardest thing to break with tradition—especially when your own ancestors are the ones who established the tradition!” says Duffles.

Challenges span beyond heritage and into the modern world of Austria in which they live. In urban areas, many members do not own cars but rather rely on public transportation like the bus, tram, and metro systems. But even this can’t stop the work from going forward. Small branches and groups have begun to blossom throughout the rural landscape of Austria, and members have come together to help these new congregations.

“Experienced members will sometimes rotate callings to serve others by supporting branches that are remote,” says Pietsch. “Several members do this, passing by the meetinghouses nearby, just to travel long distances for the spiritual well-being of members not living in urban areas.” Even though these wards are separated by great distances, there is a humbling sense of brotherly kindness among the Austrian saints.

If anything, the small numbers and large distances have only instilled a greater desire in the members to be unified. In addition to their willingness to give to one another, there is also a great emphasis on achieving stake goals. While they may only have two stakes now, they hope to make those two stakes multiply to four and then eight and more.

Instead of trying to outdo each other, the Austrian wards work in harmony to make their little corner of Zion shine as brightly as it can.

One of those important stake goals is helping the missionaries in their wards find and teach future members of the Church. In a country about the size of South Carolina but with twice as many people, finding those who are ready to accept the gospel can seem daunting. But luckily for the missionaries in Austria, the members there are ready and willing to work alongside them.

“One member repeatedly hands out Book of Mormons to people he meets during the week,” says Pietsch. “He just recently increased his personal goal of one book a week to ten books—and he is getting there!”

Most of the members focus on the essentials of the gospel. “The members here in Vienna have a very down-to-earth approach to their lives,” says Duffles. “Unity is here! But it’s an uphill battle.”

Because of faithful members like these, the weak are succored, the hanging hands are lifted, and the feeble knees are strengthened. These members know how to lift where they stand. “The truth is we are all members of the same Church, trying our best to live the same gospel,” says Duffles.

Check out more articles about the Church around the world in Madagascar and Mongolia.