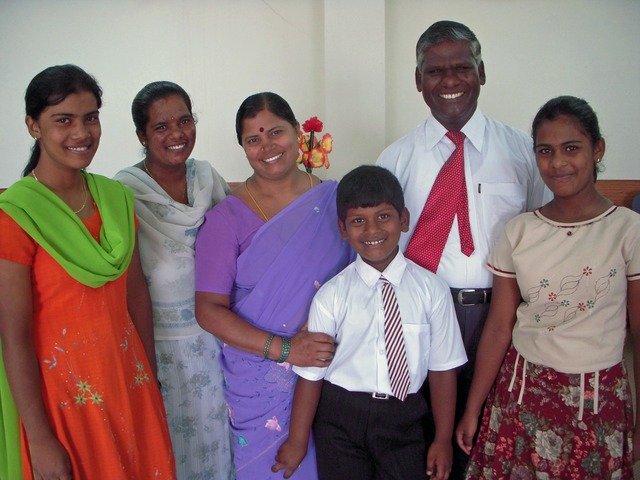 The Church in India

Its nearly 10,000 Members of the Church are taking hold of their proverbial handcarts, challenging tradition, and boldly paving the trail from a culture of man to a culture of Christ.

Seeds of the gospel have been planted in India for more than 160 years. In 1851, Joseph Richards performed the first baptisms and organized the first branch. In 1852, President Brigham Young called 108 missionaries to worldwide service—and sent nine of them to India.

But the seeds had trouble blooming where they were planted.

According to the Church Almanac, “The missionaries quickly discovered that the British and Europeans who lived in India were ‘aristocratic and cared little for spiritual things.’ And the Indians, influenced by proselyting tactics of other Christian faiths, anticipated some economic reward for joining the Church. Few people were baptized, and the number of missionaries dropped after July 1854.”

Fast-forward to the early 1900s, when John H. Cooper arrived as a missionary. His passion for the gospel in India led to baptisms and branches, and those sprouting seeds laid the groundwork for our religious roots in the country.

Among the groundbreaking highlights?

In 1921, David O. McKay visited India—the first General Authority to do so. In 1974, there were 115 known members of the Church. In 1982, the Church was incorporated as a legal entity and the Book of Mormon was printed in Hindi. In 1986, the first Indian missionaries were called to serve in their own country. In 1993, the first mission was organized—the India Bangalore Mission. In 2003, there were 4,632 members.

In 2005, President Gordon B. Hinckley visited India and spoke to more than 600 members in a meeting still talked about today. In 2007, the India New Delhi Mission was organized. The mission includes Northern India, Pakistan, Nepal, Bhutan, and Bangladesh. And in 2012, Elder Dallin H. Oaks organized the first stake—the Hyderabad India Stake.

Along with the beautiful scenery comes a complicated history—one of a caste system, arranged marriages, and a tradition of male dominance.

“The caste system is now illegal, but it’s certainly still a part of the culture,” says Melvin R. Nichols, who served as mission president for the India Bangalore Mission from 2007 to 2010. “It’s akin to the deep South in 1958. Racism and segregation were against the law—but still widely practiced.”

And one thing that affects your social standing for the worse is becoming a Christian.

“Christianity is not looked well upon, and to convert and go against the tradition of their fathers takes a tremendous amount of sacrifice—a type of sacrifice we in the U.S. can’t even comprehend,” Nichols says. “Indian Saints are a faithful, faithful people.”

Moreover, they inspire faith in others.

“One of my personal greatest witnesses of the gospel has been seeing the change in these Indian Saints,” says William K. Jackson, who served as mission president of the India New Delhi Mission from 2009 to 2012. “I’ve seen the gospel’s transforming power. To see these people leave behind the traditions of their culture to obtain something higher—to leave behind a culture of man and adopt a culture of Christ—has been life changing for me. I’m in awe of them. These are modern-day pioneers.”

John Guddy was born in India to Godfearing, family-oriented Christian parents. But there was something missing six days a week.

“Christianity was more visible on Sundays,” he says. Then his family met the Latter-day Saint missionaries. First his brother was baptized, and then his sister. And the change in them was overwhelming.

President Guddy and his wife, Sudha.

“I looked at my brother and sister, who always found goodness and happiness at church,” he says. “I had many questions comparing gospel and science, but it was the testimonies and happiness in the gospel that converted me. My brother, Victor, baptized me on November 19, 1989.”

Then there’s Steven Mudumala, who met the missionaries when they moved into his area of Hyderabad. He’s now the Bangalore India district president.

“These are Saints who are proud to be members of the Church,” Nichols says. “I can remember being in meetings time and time again where we’d have fifty men standing in the hall because we didn’t have enough seats. It’d be ninety-eight degrees, ninety-three percent humidity, and the air conditioner would quit ten minutes before the meeting. No one complained. No one left. It was amazing.”

William K. Jackson, a former mission president in India who has lived there for 11 years, likens the saints to “humble sponges, ready to soak everything in,” he says. “I’ve been endlessly impressed with how much they want to learn and become leaders. They may not know the handbooks and the policies like we do, but they know what it means to be a shepherd. They know how to be accountable for their brothers and sisters in the gospel.”

Missionary work in India is infectious.

The missionary force, made up of mostly natives, rarely tracts because they’re too busy with member referrals. (Best problem ever.)

“India has become a ‘preach my gospel’ country,” Jackson says. “Every member is truly a missionary, and the baptisms have exponentially increased because of it.” That missionary fervor among members has, quite possibly, come from the on-again, off-again struggle of obtaining visas for foreign missionaries.

“The visa battle is certainly a great concern,” Jackson says, “but I also saw it as an opportunity for the Indian Saints. They knew they needed to rise to the challenge of getting their children out on missions.

They couldn’t rely on getting missionaries from around the world—they needed to create a culture of missionary work at home. And that’s exactly what’s happened. Youth there have been out with the missionaries a hundred times. Leaders have combined forces and streamlined their efforts to bring people into the gospel. It’s how it should be.”

And the longevity of converts is equally inspiring.

“The retention rate in India is certainly one of the highest in the Church,” Nichols says.

A big benefit to the Church has been India’s history of spirituality and family focus. The gospel’s message of forever families resonates with them, and they enjoy debating religion.

“Indian culture is naturally very respectful of religious people and leaders,” Nichols says. “There are issues when it comes to changing your religion, but discussing it is not nearly as sensitive a subject as it is in the Western world. There’s much more acceptance, which makes it easier to approach people.”

And unlike most areas of the Church, the missionaries are baptizing a higher number of men than women—possibly due to the country’s history of male dominance.

“The first generation of women Saints have had the biggest transition to make,” Jackson says. “They come from a culture where they are arguably second-class citizens. And many of the Indian women don’t have the self-worth they deserve. But when they get baptized, we’ve seen them transition from being shy and in the shadows to smiling and walking the halls as leaders. They realize how valuable they are. It’s heartwarming—and extremely fun to watch.”

Nichols remembers one sister in particular, a 24-year-old MBA graduate serving as a sister missionary.

“In our interview together, she said, ‘President, let me tell you what the Church has done for me. The Church has taught me I have a brain. Growing up in my village, I never once made a single decision of my own. I didn’t think I was capable of it. But the gospel has taught me that not only do I have a brain, I have the gift of the Holy Ghost to help me make good decisions with that brain.’”

The biggest obstacle of missionary work in India is simple: not enough missionaries.

But it’s a surface Indian Saints are anxious to uncover.

“Real growth is taking place and it is very evident in the members’ lives,” Mudumala says. “It’s good to see this ‘great stone’ roll forth in India and we are grateful to see the members’ commitment in taking the Church forward.”

The gospel’s future in India is as bright as its scenery, and the contagious optimism is largely thanks to the youth of the Church.

“They are quite amazing!” Sister Jackson says. “Many are the only members in their families. They are learning a whole new culture, and it is especially gratifying to see my seminary students go on missions, marry in the temple, and see their beautiful children born under the covenant.”

“These kids are coming in with an entirely different perspective than their parents,” Brother Jackson adds. “They have been raised to champion their potential. They are confident in their self-worth. The first generation held tight to the iron rod, and now their children are helping the Church grow by leaps and bounds. I can’t tell you what a privilege it’s been to witness it firsthand.”

And our Indian brothers and sisters don’t take the privilege for granted.

“I am privileged to be a member of the true church and always wanted to serve others. The Lord has given me a wonderful opportunity to serve, and to know that life is for eternity is a great feeling,” Guddy says. “Though the Church in India is very small, I’m sure that God has prepared India for many things in the future. There are many pioneers here. This is a place of promise.”

Read more about the Church in other places like Madagascar, Austria, and Mongolia.